Definition: Communication is the process of transmitting information from one person to another. It is the act of sharing of ideas, facts, opinions, thoughts, messages or emotions to other people, in and out the organisation, with the use of the channel to create mutual understanding and confidence.

It is not tied to words, i.e. whether an individual speaks or not, the message is automatically conveyed to the other party. Besides words, communication can take place through symbols, letters, actions, expressions, etc. 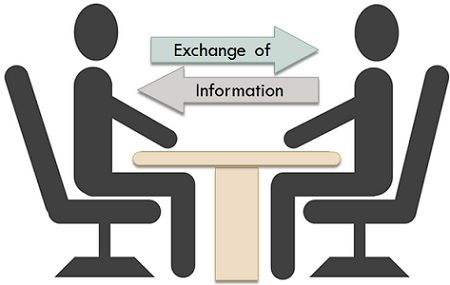 Communication is a two way process, wherein interchange of message connects the sender and receiver, towards an agreed direction, consisting seven elements:

All the seven elements of communication has a great role to play in the entire process, as there can be some deformation between the intended message and the received one.

Informal communication is the fastest form of communication, that rapidly transmits information to various members of the organisation. Further, the response of the members can also be obtained quickly.

Communication is the spine of the organization that without it no organisation can survive and operate effectively, towards attaining its goals. It is the primary means, by which organisational members work together. Further, it ties all the members of an organisation in a single thread and let them respond to and influence each other.