Definition: Insurance refers to a contractual arrangement in which one party, i.e. insurance company or the insurer, agrees to compensate the loss or damage sustained to another party, i.e. the insured, by paying a definite amount, in exchange for an adequate consideration called as premium.

It is often represented by an insurance policy, wherein the insured gets financial protection from the insurer against losses due to the occurrence of any event which is not under the control of the insured.

Basically, there are two types of insurance, as presented below: 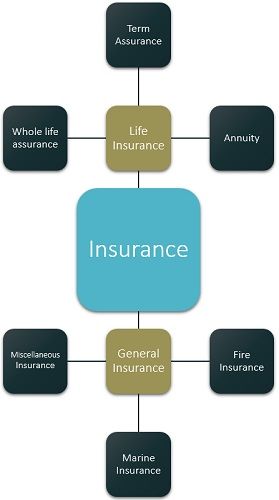 Insurance is a great way to avoid the loss or shift it to another party. It also gives a sense of security to the individuals. Indeed, it mobilises savings of the individuals in the form of investment in the policies, which are reinvested by the insurance companies in the securities of the publicly listed companies, to earn a dividend on it.