Definition: In common parlance, the word ‘indemnity’ implies reimbursement against financial loss or protect someone from incurring a loss.

Therefore, it does not cover the loss caused by – Conduct of promisee, Accident and An act of God, i.e. any kind of natural calamity such as earthquake, floods etc. Nevertheless, the contracts of insurance, i.e. Fire and Marine Insurance will be covered under the contract of indemnity, but life insurance is not covered in it.

It is characterised by all the essential elements of a valid contract, i.e. lawful object, consideration, free consent of the parties, capacity of the parties to contract, etc.

Parties to Contract of Indemnity

There are only two parties in a contract of indemnity, explained as under: 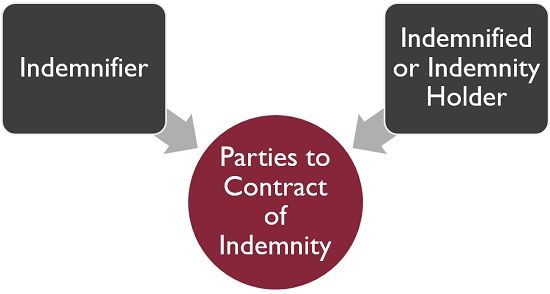 The examples of the contract of indemnity are given hereunder:

The essence of the contract of indemnity is the loss to the party, i.e. Indemnification can be done only if the loss is incurred to the other party, or if it is sure that the loss will incur.