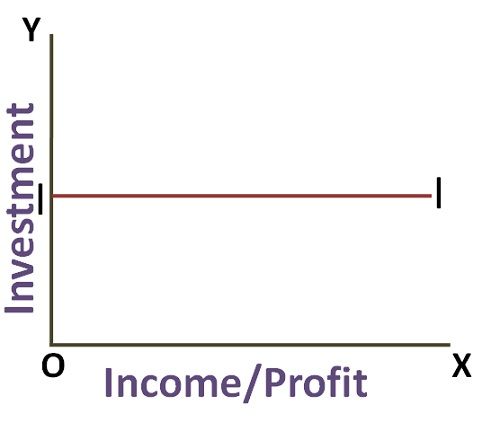 The graph shows that autonomous investment remains independent of the level of income and profit and hence is parallel to the X axis. It does not mean that induced investment does not change at all; it can be increased or decreased at the individual’s disposal. In such a case, the investment curve I-I either shifts upwards or downwards.

Generally, these investments are made by the government in the form of construction of roads, buildings, flyovers, etc. The autonomous investment is not continuous in nature which means, there could be a rise and fall in the amount of investments depending on the government’s desire.

Also, the firms can make these investments with the purpose of introducing new technology, new inventions or increasing the demand potential in case of an economic recession and unemployment, etc.

Thus, we can say that profit/income induces no effect on the autonomous investment; it is the social welfare that brings a change in the investment levels. This can be seen, when a government make these investments at the time of recession, with the intention to boost the economy.