Definition: The barter system is a system of exchange, which was prevalent in the world centuries ago, before the introduction of the monetary system. In this arrangement, goods and services are traded for goods and services. This means that the parties exchange each other’s commodity directly without any mediation of money on the basis of equivalent estimates of price and goods.

Barter System is characterised by: 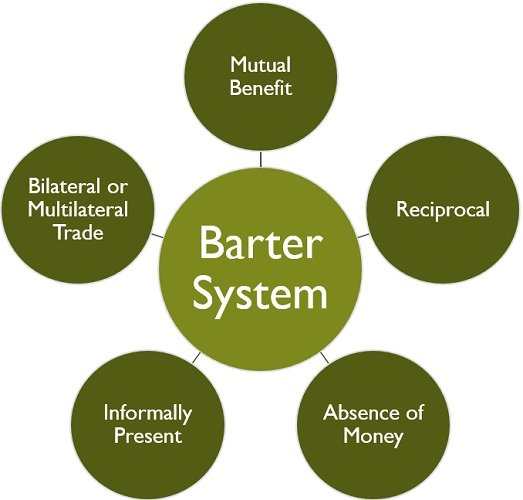 Limitations of the Barter system

Though barter exchange is simple and immediate, it has certain limitations also, which are discussed hereunder: 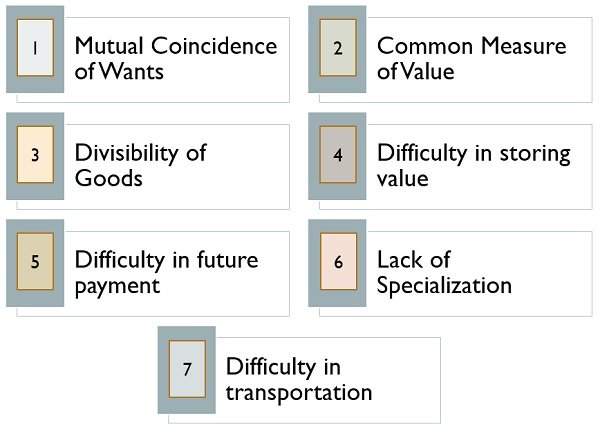 1. Mutual Coincidence of Wants: This is one of the most common problems faced by people in barter exchange. Mutual coincidence pr double coincidence of wants means that if one party wants to exchange a particular commodity with another party, then it is not necessary that the latter is also willing to exchange the commodity which the former party is looking for. so, the wants of two people must coincide.

2. Common Measure of Value: Lack of a common measure of value, is another major issue in barter exchange. So, in the absence of any common unit of measurement, people find it difficult to estimate the true and exact value of the commodity. Hence, the commodity is measured in terms of the commodity only.

For example, there are two parties a fruit seller and a carpenter, who want to exchange fruits against the chair. So, what they need to decide is what should be the proportion of the two commodities which are to be exchanged, i.e. how many dozens of fruits are required to be exchanged for a chair? Basically, these are isolated transactions and in the absence of any common unit of measurement, the exchange is possible only in an arbitrary manner.

3. Divisibility of Goods: Some commodities cannot be divided into small parts/pieces, without any reduction in their actual value. This problem mainly arises when the commodity which is to be exchanged is livestock. All the commodities do not possess the same value.

For example, A person wants to exchange his horse and wants 5 kg of rice. Suppose 1 horse is equal to 100 kg of rice. In such a case, it is not possible for him to divide the horse into pieces to get the rice. And if he gives the horse against 5 kg rice, he is going to lose. So, it makes the barter system inconvenient.

4. Difficulty in storing value: Value or wealth can only be stored in the form of commodities, such as food grains, cattle, fruits, vegetables, etc. which is not possible due to perishability, degradation in quality, space for storage and expenses on goods.

For example: Suppose a person provides services to another person for which the former received 1 quintal wheat and 4 goats. And the goats consumed all the wheat received by him. And after some time the goats died because of a disease. Hence, storage in the form of commodities is not at all possible.

5. Difficulty in future payment: In the absence of any satisfactory unit of measurement, it is a bit difficult to enter in any contract which involves future payment, as the payments are to be specified in terms of goods and services. However, there is the possibility of disagreement as to the quality of good, a particular kind of good and change in the value of the good.

For example, One party provided services to another party, on an agreement that the latter would be provided 10 kg of rice for that, after one year. The quality and value of rice might change in future. So, deferred payment is not at all possible.

6. Lack of Specialization: In the olden days, when the barter system was prevalent in the country, people tend to be self-sufficient, i.e. they produce the items of their need or we can say they were a jack of all trades. Hence, there was a lack of specialization.

For example: Suppose a person produces all that he needs like wheat, rice, pulses, cotton, etc. just for his own consumption and the exchange was minimal between people, which hampers economic growth.

For example: Suppose a farmer and a carpenter, who are several miles away from each other wants to exchange food grains against furniture. In that case both of them have to transport their commodities from one place to another.

An economy that follows direct barter of commodities is called a Barter Economy, or Commodity to Commodity (C2C Economy).