Definition: Capitalism refers to an economic and political system, wherein the private individuals own and control the country’s factors of production (land, labour, capital) for making a profit. In finer terms, private property is the essence of a capitalist economy and profit works as a motivation here.

Under this system, the government does not intervene in the management of economic affairs. The capitalist enterprises carry out production activities, wherein the private owners freely operate their business, as per their will, such as:

Capitalism is the oldest social system, which is still prevalent in many countries of the world like United States, Australia, Canada, Mexico, Italy, France and many more. It is also known as a free-market economy or laissez-faire economy.

The characteristics of capitalism are explained hereunder: 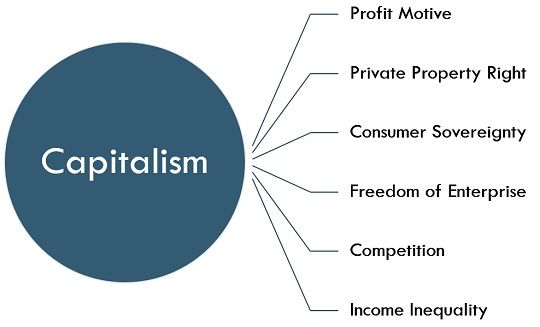 In capitalism, no central planning authority exists to solve the central economic problems, i.e. what, how, when and for whom to produce. In such a situation, it is quite difficult to identify, as to what are the forces that cause the economy to function smoothly.

Suppose, if consumers demand washing machines and producers want to produce computers, and workers choose to make cars, then a situation of disorder and disorientation may occur.

But to overcome such a problem, a capitalist economy resorts to market demand and supply forces and price mechanism (also known as a market mechanism) to solve the central economic problems.