Definition: The term ‘cartel’ refers to an arrangement wherein two or more large producer firms comes together, to regulate the supply of the goods and services with the aim of manipulating the prices. And to do so, the producers agree to cooperate with one another, with which they can limit competition and dominate the entire market. It is also termed as price rings.

It is the association of independent participants operating in the same industry, who act in unity, just like a single producer, in order to set a fixed price for the commodity they produce, or services they provide, without competition.

In a cartel, the member firms focus on production as per the limit of output set or decided by the cartel, considering the factors such as market conditions and to govern the distribution of offerings so as to maintain the return or price of the commodity by restrictive trade practices.

In this arrangement, the individual identity and financial independence of the member firms are kept intact, while they are engaged in the agreement.

In other words, cartel implies the alliance of competitors in the same sphere of business.

It involves setting limits of output or capacity, controlling the price, restriction on non-price competition and allocating the market between cartel members either geographically or according to the type of product or agreed terms, so as to limit the entry and create a monopoly.

The purpose is to apply some form of restrictive influence on the manufacturing, supply or sale of the product. The producers are competitors operating in the same industry, who are willing to minimize the competition by regulating the prices while working in union.

There are two types of a cartel agreement, which are: 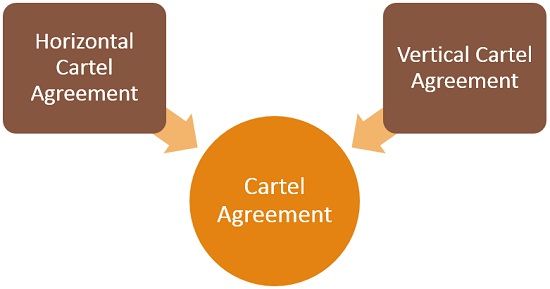 When it comes to treatment in the court of law, vertical cartel agreements are treated more leniently as compared to the horizontal one because the later reduces competition to a great extent.

In many countries, the formation of a cartel is regarded as unlawful, as it against consumer interest. The negative impact of the cartel on consumers are discussed as under: 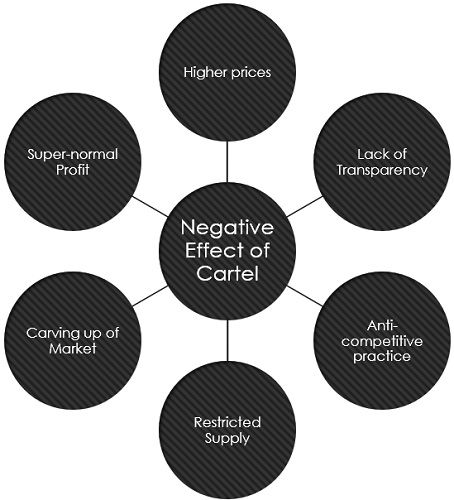 Typically, cartels encompass a formal or informal agreement between the firms to not compete with one another. It can take place in any industry and at any level, i.e. manufacturing, distribution or retail, irrespective of the commodity or service offered. Such restraints are termed as trade combinations, anti-trust, anti-competitive practices.

These trade practices are often challenged in the court of law on the grounds of using unlawful conspiracies, as they prevent fair competition in the market.