Definition: Demerger is the business strategy wherein company transfers one or more of its business undertakings to another company. In other words, when a company splits off its existing business activities into several components, with the intent to form a new company that operates on its own or sell or dissolve the unit so separated, is called a demerger. 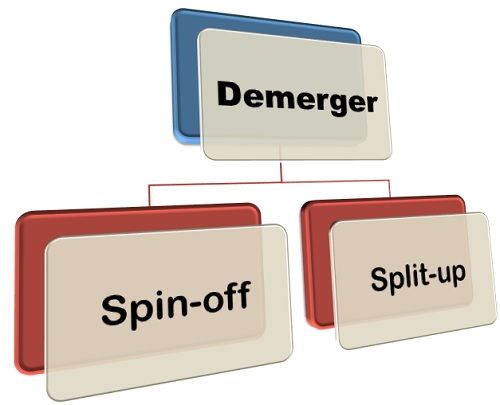 Spin-off: It is the divestiture strategy wherein the company’s division or undertaking is separated as an independent company. Once the undertakings are spun-off, both the parent company and the resulting company act as a separate corporate entities.

Generally, the spin-off strategy is adopted when the company wants to dispose of the non-core assets or feels that the potential of the business unit can be well explored when operating under the independent management structure and possibly attracting more outside investments.

Wipro’s information technology division is the best example of spin-off, which got separated from its parent company long back in 1980’s.

Split-up: A business strategy wherein a company splits-up into one or more independent companies, such that the parent company ceases to exist. Once the company is split into separate entities, the shares of the parent company is exchanged for the shares in the new company and are distributed in the same proportion as held in the original company, depending on the situation.

The company may go for a split-up if the government mandates it, in order to curtail the monopoly practices. Also, if the company has several business lines and the management is not able to control all at the same time, may separate it to focus on the core business activity.