In the definition, the “other things” are the factors that influence the demand such as consumer’s income, price of related goods, consumer’s tastes and preferences, advertisement, etc. The law of demand can be further illustrated by the Demand Schedule and the Demand Curve.

Demand Schedule:  The demand schedule is a tabular presentation of series of prices arranged in some chronological order, i.e. either in ascending or descending order along with their corresponding quantities which the consumers are willing to purchase per unit of time. A hypothetical daily demand schedule for the commodity (Wheat) is given below:

The table clearly illustrates the law of demand, i.e. the demand for wheat increases as its price decreases. For example, at price Rs 14/kg only 3 kg of wheat is demanded, but as the price decreases to Rs 13/kg the quantity demanded increased to 4 kg. 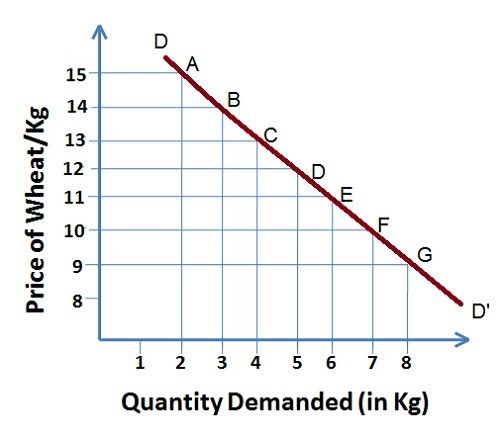 The DD’ is the demand curve that depicts the law of demand. The demand curve is downward sloping towards the right, which shows that as the price of the wheat decreases the quantity demanded increases.

While plotting the demand curve the following assumptions are to be taken into the consideration:

Thus, it is clear from the above explanation that the law of demand strictly follows an inverse relationship between the price of the product and its quantity demanded, i.e. the quantity decreases with the increase in the price and vice-versa.