Definition: The Budget Line, also called as Budget Constraint shows all the combinations of two commodities that a consumer can afford at given market prices and within the particular income level.

We know that the higher the indifference curve, the higher is the utility, and thus, utility maximizing consumer will strive to reach the highest possible Indifference curve. But, he has two strong constraints: limited income and given the market price of goods and services. The income in hand is the main constraint (budgetary) that decides how high a consumer can go on the indifference map. In a two commodity model, the budgetary constraint can be expressed in the form of the budget equation:

Where,
Px and Py are the prices of commodity X and Y and Qx, and Qy is their respective quantities.
M= consumer’s money income

The Budget equation states that the consumer’s expenditure on commodity X and Y cannot exceed his money income (M). Thus, the quantities of commodities X and Y that a consumer can buy from his income (M) at given prices Px and Py can be calculated through the budget equation given below: 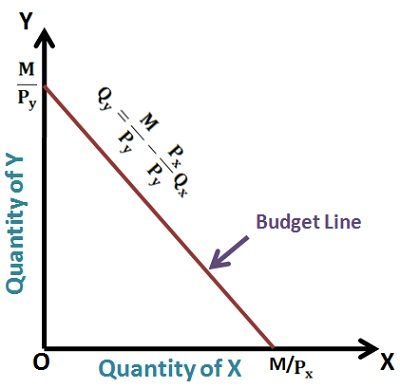 The values of Qx and Qy are plotted on the X and Y axis, and a line with a negative slope is drawn connecting the points so obtained. This line is called the budget line or price line.