Definition: The Classical Conditioning Theory was proposed by a Russian Physiologist Ivan Pavlov. According to this theory, behavior is learnt by a repetitive association between the response and the stimulus.

The classical conditioning theory is based on the assumption that learning is developed through the interactions with the environment. Also, the environment shapes the behavior and internal mental state such as thoughts, feelings, emotions do not explain the human behavior.

Here, an organism learns to transfer response from one stimulus to a previously neutral stimulus. Classical conditioning is comprised of four elements:

Pavlov conducted an experiment on a dog and measured the amount of saliva secreted by a dog, with a use of a surgical procedure, when it is exposed to different stimulus or object. At first, when Pavlov presented a piece of meat (US) to the dog, he noticed a great amount of salivation (UR) whereas, in the second time, when he just rang the bell, he observed there was no effect of a bell on the dog’s salivation.

After this, Pavlov rang the bell accompanied with meat and noticed the salivation of a dog. He repeated this process several times, and finally, one day he just rang the bell without meat and observed that dog still salivated to the bell alone which was originally a neutral stimulus. 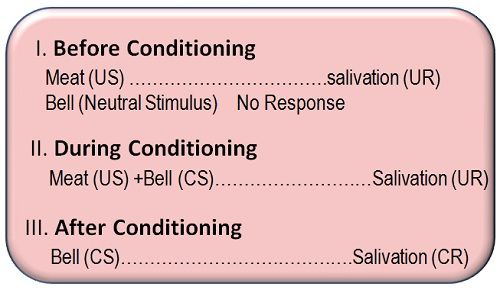 Thus, he found out, that the dog has become classically conditioned (CR) to the sound of the bell (CS). And every time he rings the bell the dog salivates.