Definition: The Conditioning Theory refers to the behavioral process, whereby a reaction (response) becomes more frequent to a given object (stimulus) as a result of reinforcement, which is a reward for the response in a given situation.

In other words, conditioning is a process in which the ineffective object or event becomes so much effective that it makes the hidden responses clearly visible to all. The conditioning theory is based on the premise that learning is establishing the relationship between the stimulus and response. Thus, the stimulus-response theories are central to the principle of conditioning theory.

There are two main theories of conditioning: 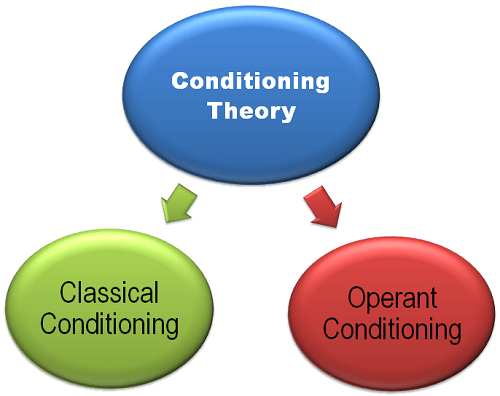 The first contributor to this field was Edward.L.Thorndike, who gave the “Law of Effect”. According to this law, any behavioral responses that are followed by rewards or satisfactory results are most likely to become the established pattern and occurs again and again in response to the same stimulus. Simply, an individual develops the permanent behavior for a given stimulus, if some rewards are associated with it.

Example: If your Mother has given some work and on the completion of it, she gave you some monetary reward, and you learned that for doing the same work, again and again, you get the reward. So you will always be ready to take that work with the hope of getting the reward.