Definition: Cluster Sampling involves the formation of suitable clusters of units. Thereafter, collecting information on all the units in that sample of clusters chosen for research, keeping in mind the appropriate sampling strategy.

For this purpose, the whole population to be studied is divided into small groups. After that, the researchers choose random groups using either simple random sampling or systematic random sampling techniques. These groups are known as clusters. A cluster is composed of a broad range of elements that are good representatives of the population.

Further, the elements of the clusters are known as elementary units. In cluster sampling, there will be more heterogeneity within the cluster and more homogeneity among clusters.

Cluster Sampling relies on the researcher’s ability to divide the sampling population into groups. The division depends on the apparent or easily identifiable characteristics. The formation of clusters can be based on geographical proximity or common characteristics, which are correlated to the main variable of the study.

It is a type of probability sampling technique that studies large populations, especially one which is spread across a large geographical area. For obtaining a cluster sample, a particular number of clusters are selected randomly out of all the clusters present. After that, all the items covered by the selected clusters are included in the sample.

When the researcher uses this sampling method, it gives all the members of the sample an equal and known chance of becoming part of the sample. In this, the whole population is divided into various non-overlapping sub-groups or clusters. Non-overlapping subgroup means that members do not appear in more than one group.

After that, a random cluster is drawn, and all the elementary units of that cluster are observed to gather information.

Based on the clustering level, sometimes sampling is performed at different levels. These levels make up various stages of clustering, i.e. single, double or multiple. Here, we will discuss the different types of cluster sampling: 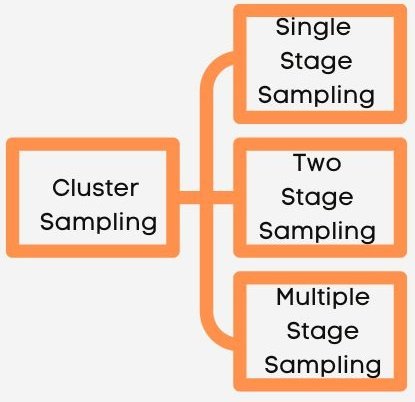 The researcher prefers cluster sampling when:

In this, we prepare a list of clusters rather than preparing a list of individual elements. The researcher prefers cluster sampling when the listing of elements is either unavailable or, even if it is available, it is not reliable. Further, keeping aside all the advantages, there is one limitation of cluster sampling, and that is it becomes inefficient when elements of the cluster are similar.