Definition: Commercial Bank can be described as a financial institution, that offers basic investment products like a savings account, current account, etc to the individuals and corporates. Along with that, it provides a range of financial services to the general public such as accepting deposits, granting loans and advances to the customers.

It is a profit making company, which pays interest at a low rate to the depositors and charges higher rate of interest to the borrowers and in this way, the bank earns the profit. 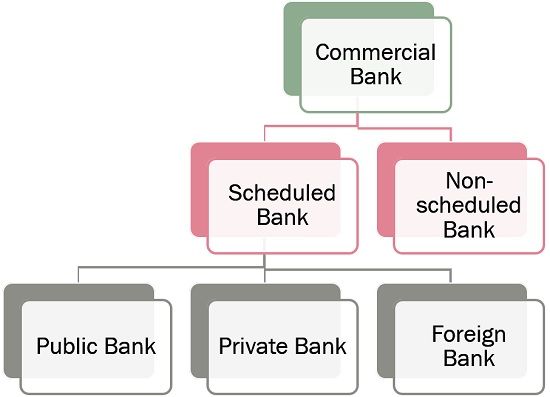 Non-scheduled commercial banks refer to the banks which are not covered in the Reserve Bank of India’s second schedule. The paid-up capital of such banks is not more than Rs. 5 lakhs.

A commercial bank offers an array of facilities such as internet banking, mobile banking, ATM facility, credit card facility, NEFT, RTGS and so forth for which it charges a definite sum as a fee for providing these facilities.