Definition: As the name suggests, cooperative society refers to that type of business organization wherein people work together for a common goal, i.e. welfare of its members.

It has to be registered under the Cooperative Societies Act, 1912, in order to obtain the status of a separate legal identity. The members of the cooperative society raise the capital themselves by issuing shares.

It is an autonomous association of individuals, operated with the motive of safeguarding their economic, cultural and social interests if there are possible chances of exploitation while dealing with the intermediaries who want to earn maximum profits.

The characteristics of a cooperative society are listed below: 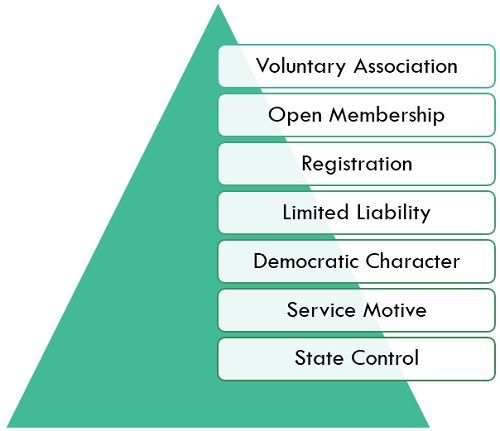 The cooperative society works on the notion of self-help and mutual help, and so it aims at providing support to its members.

There are seven major types of cooperative societies, discussed as under: 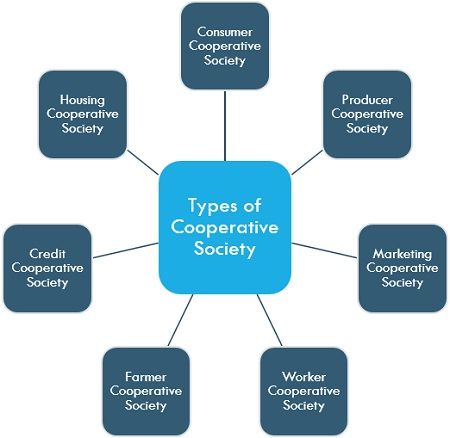 The cooperative society established with the purpose of safeguarding the interest of consumers and promoting their welfare is a consumer cooperative society. Consumers who prefer to purchase a good quality product at reasonable prices often join these societies.

Further, to attain economy in operations, these societies eliminate middlemen, and for that, it purchases goods directly from the wholesalers and sells them to customers.

When a cooperative society is formed with the aim of protecting the interest of small producers and increasing their bargaining power. Its members are those producers who wish to procure inputs, such as raw materials, tools, equipment and suppliers, for the production of goods to satisfy consumer demands.

These societies are set up to help small producers to sell their products by providing them with reasonable prices for their offerings. It is possible by eliminating middlemen and obtaining a competitive market position.

Also called as workers’ cooperative, is a form of cooperative society whose ownership and management lies in the hands of its workers. Meaning that the members of the society are both employees as well as its members.

These societies provide quality inputs such as seeds, fertilizers, insecticides, machinery, manure, irrigation equipment, support services, etc to the farmers for their development as well as welfare. Its purpose is to gain the advantage of large-scale farming and increase yield.

These societies aim at providing loan facilities at a nominal interest rate to the members. And so the members are those who look for financial aid. It aims at protecting the members from being exploited by money sharks, who charge high interest. The loan is provided out of the money raised as capital and the deposits of members.

As the name suggests, a housing cooperative society is one that helps people with low income to build their houses. The residential accommodation problem is resolved by society by building flats or providing plots to the members on which they can themselves construct the house.

So, people do not join a cooperative society to earn money, rather, they join it as a group to pool their resources, and use the same in an optimum manner and procure some shared benefit.