Definition: Non-Profit Organization, as the name signifies a type of organization that does not operate with the purpose of making a profit, rather, it works for a social cause. NPOs are legally and voluntarily registered entities, run by a group of people with a service motive, so as to promote the general welfare of the public.

The money earned in the form of revenues or the profits made by the organization, from various activities, are used for the promotion of its objectives and not distributed among its members as dividends.

Some popular Non-Profit Organization which is based in India are: 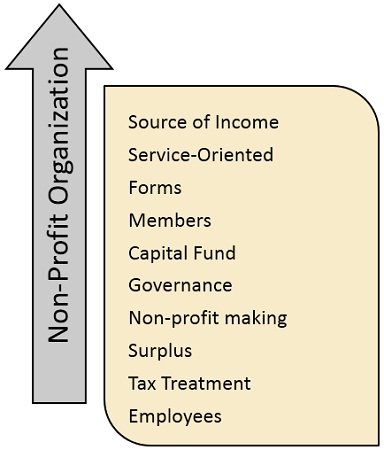 There are three main forms of Non-Profit Organization: 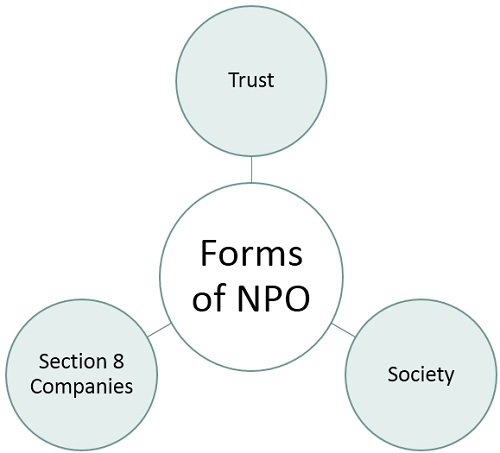 The formation of public charitable trust takes place, when property, i.e. land, and the building are involved. A trust deed has to be executed which lays down the aim, objectives, management mode, minimum and maximum number of trustees, appointment, and removal of trustees.

Further, different states have different Trust Acts, however, in the absence of the act in any state or union territory, the Indian Trust Act, 1882 becomes applicable.

Under Section 20, Societies Registration Act, 1860, societies like charitable society, military orphan fund, societies set up for the promotion of science, fine arts, literature, education, can be registered under the act.

In the case of societies Memorandum of Association (MOA) plays a significant role which states the rules and regulations, aims, and objectives of the society.

Section 8 Companies of the Companies Act, 2013 cover those not-for-profit companies that are set up for the promotion of commerce, art, sports, education, science, social welfare, religion, environmental protection, and so forth.

These companies are required to use their income for furthering the objectives and prohibits the division of profits among their owners.

Registration of Non-Profit company under section 8 as NGO involves the following process:

So, a Non-Profit Organization does not mean that the organization cannot earn a profit, rather it earns profit, but it is not distributed to its owners.