Definition: Credit Control is a function performed by the Central Bank (Reserve Bank of India), to control the credit, i.e. the demand and supply of money or say liquidity in the economy. With this function, the central bank regulates the credit granted by the commercial banks to its customers. It aims to achieve economic development with stability as well as to manage the inflationary and deflationary pressure.

The basic objectives of credit control are:

Different methods are used by the Central Bank to control credit, which is broadly classified into two main categories:

Quantitative Methods of Credit Control are related to Quantity or Volume of Money and are aimed at regulating the total volume of bank credit. These tools are indirect in nature and they tend to influence the loanable funds of the commercial banks.

The total quantity of deposits created by the commercial banks is expected to be controlled and adjusted using these methods. It maintains a balance between savings and investment. 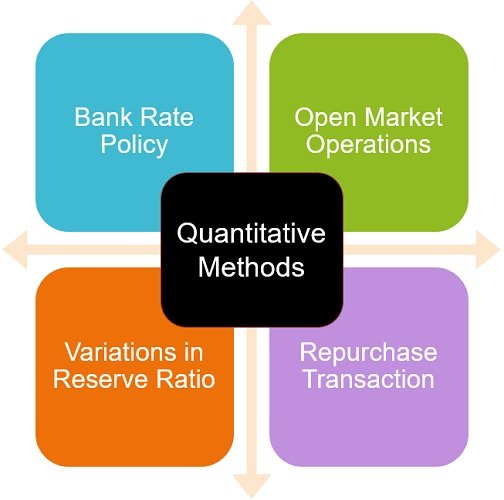 1. Bank Rate Policy: Otherwise called a discount rate policy. It is described as the standard rate at which the central bank is ready to purchase and rediscount eligible instruments like government-approved bills and commercial papers. It has a great influence on the availability and cost of credit.

2. Open Market Operations (OMO): It implies trading of eligible securities by the country’s apex bank, i.e. RBI in both capital market and money market. When the central bank purchases or sells short term or long term securities, it leads to an increase or decrease in the financial resources of the commercial bank.

This will ultimately influence the credit creation of the banks.

3. Variations in the Reserve Ratio: We all know that commercial banks have to maintain a specified percentage of their net demand and time liabilities as Cash Reserves, with RBI. As well as a certain proportion of their net demand and time liabilities has to be maintained by the banks in the form of liquid assets. These reserve ratios are called Cash Reserve Ratio (CRR) and Statutory Liquidity Ratio (SLR) respectively.

Even the slightest change in these ratios can affect the reserve position of the commercial banks, which in turn regulates the supply of money in the economy.

4. Repo, i.e. Repurchase Option: Repo or otherwise called Repurchase transactions are carried out by the central bank, to regulate the money market situation. As per this transaction, the Central bank grants loan to commercial banks against government-approved securities for a fixed period, at a specified rate, called as Repo Rate, on a condition that the borrower bank will repurchase the securities at the predetermined rate, once the period is over.

These transactions are undertaken by the central bank in order to absorb or drain liquidity from the system.

In this way, the qualitative methods of credit control come into the picture, wherein the credit is made available to productive and priority sectors, while the others are restricted. 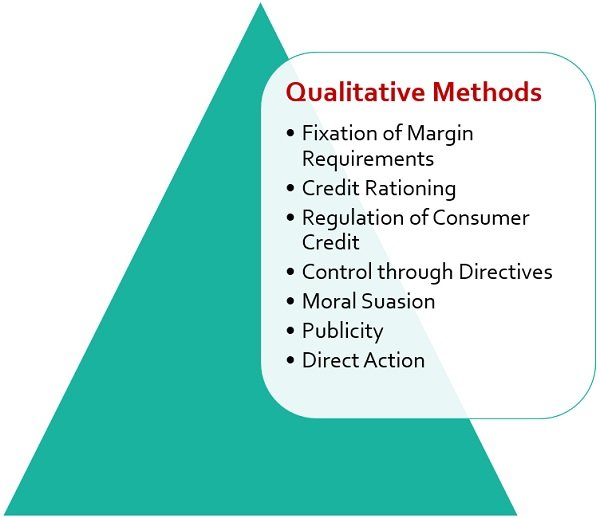 1. Fixation of margin requirements: In this technique, the central bank determines the margin which commercial banks and financial institutions need to maintain for the amount extended by them in the form of loans, against commodities, stocks and shares. The central bank also prescribes margin requirements for the underlying securities, so as to restrict speculative dealing in stock exchanges.

2. Credit Rationing: As per this method, the central bank attempts to restrict the upper ceiling of loans and advances to a particular sector. Moreover, in specific cases, the central bank may also fix the ceiling for different categories of loans and advances. Also, commercial banks are expected to stick to this limit. This facilitates the lessingt of bank credit exposure to unwanted sectors.

3. Regulation of Consumer Credit: With an aim of regulating consumer credit, the apex bank determines the down payments and the length of the period over which installments are to be spread. At the time of inflation, higher restrictions are levied to control the prices by controlling demands whereas, at the time of depression, relaxations are provided so as to increase demand for goods.

4. Control through directives: In this technique, the central bank issues directives from time to time so as to regulate the credit created by the commercial banks. These can be written orders, warnings, notices, or appeals.

It can help in regulating lending policies of the commercial banks or to fix a maximum limit of credit for specific purposes and also to restrain the flow of bank credit into non-essential lines. It may result in diverting the credit to productive use.

5. Moral Suasion: As per this method, the Reserve Bank of India exercises a moral influence on the commercial banks, in the form of advice, suggestion, guidelines, directives, request, and persuasion.

This is to ensure cooperation from the central bank. However, if the commercial bank does not comply with the advice extended by RBI, then they are not subject to any penal action. The success of this method mainly relies on the cooperation between the two banks i.e. central and commercial. It is helpful in limiting credit at the time of inflation in the economy.

6. Publicity: As per this method, the central bank publishes numerous reports in the form of bulletins, to state the good and the bad in the system, as well as to educate people about its view regarding credit expansion and contraction. This can help in informing the commercial bank to direct the supply of credit in the desired sectors.

In this way, the commercial banks get guidance from the Central bank and can modify their lending policies accordingly.

7. Direct Action: This technique is used by the central bank to enforce both quantitative and qualitative methods, and used as an adjunct to other methods. Further, the apex bank is authorized to take action against those banks which do not comply with the instructions extended or directives as well as it may refuse to rediscount their bills of exchange and commercial papers.

Also, RBI can refuse to supply credit to these banks, whose borrowings are greater than their capital. Even, the central bank is authorized to put a ban on a particular bank, if they do not adhere to the directives.

Bank credit is among the major source of money and RBI controls the money supply in the economy, through its policies and methods. Basically, the central bank focuses on economic growth, and thus encourages the extension of credit to productive purposes.