Definition: Financial Crisis refers to a situation in which there is an acute decline in the value of assets. Also, the businesses and consumers are not able to pay off their debts and the banks face liquidity shortages. It is related to a bank run – a situation in which many investors sell their assets or withdraw money from their accounts, as they feel like the value of their deposits will go down if they continue to keep it in the financial institution.

Financial Crisis reflects a situation in which various financial assets including stocks, real estate, fuel etc. lose a considerable amount of their face value. A period of economic boom and large scale credit extension to borrowers precedes this phase.

Credit panic and stock market crash or stoppage in the functioning of financial intermediaries are the common indicators of the financial crisis. Also, it may result in a recession. It tends to damage the real economy as it disrupts the normal flow of credit and insurance.

Because a financial crisis is an amalgam of multidimensional events. Hence, one cannot characterize it through a single indicator.

Assets and credit booms which later turn into busts are the prior stages of the financial crisis.

What is the real and financial sector implication of this crisis?

It has both financial and real effects, wherein financial effects are reflected in:

As against, the real effects of the crisis can be seen in:

Financial Crisis can take many forms. However, it is majorly classified into four types, which we have discussed here in detail: 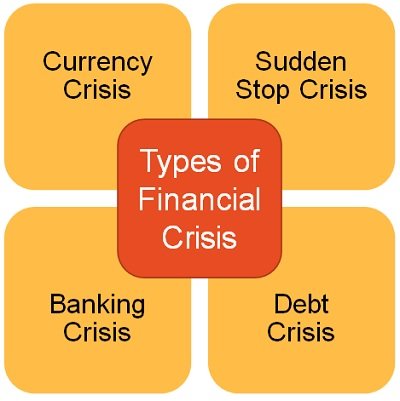 It may or may not be predictable. Factors like government, investors, central banks or a combination thereof, often trigger the financial crisis. It is caused due to the chronic balance of payments deficits. It results in economic damage on a large scale and capital loss.

It implies a sudden stop or decline in the supply of foreign capital or private capital into the economy which jeopardizes the ability of the economy to pay its external trade and financial needs.

It implies a condition prevalent in the economy wherein the nation is not able to repay its government debt. It arises when the revenue earned through taxes is less in comparison to expenditures in a long term.

You must be aware of the fact that every government finances its expenditures by arranging money from the tax revenues. And if tax revenues are inadequate, the government can offset this loss by selling treasury bills in the open market to investors.

This situation arises when a number of banks face severe issues relating to solvency and liquidity, at the same time.

To be precise, a banking crisis takes place when the corporate sector and finance sector of an economy encounters multiple frauds, scams and defaults. Due to this the banking system of the economy collapses. And the banks and financial institutions face difficulty in the repayment of contracts in a timely manner. Hence, there is a rise in non-performing assets, i.e. NPAs. As a result of which the overall banking system capital is drained.

Prediction of the financial crisis is itself a big challenge, but if it can be predicted correctly, it can help in implementing various measures to prevent such crises or mitigating the loss or damage that the crisis may cause to the economy,