Definition: Interview refers to a formal, in-depth conversation between two or more persons, wherein the exchange of information takes place, with a view of checking a candidate’s acceptability for the job.

It is an effective tool for selection. It is two-way communication between interviewer and interviewee, wherein the former seeks information, by way of questions and the latter provides the same, through his/her verbal responses. However, the information flows in both directions. In this way, the hirer learns about the applicant and the applicant also get a chance to know about the employer.

The various types of interview are explained hereunder: 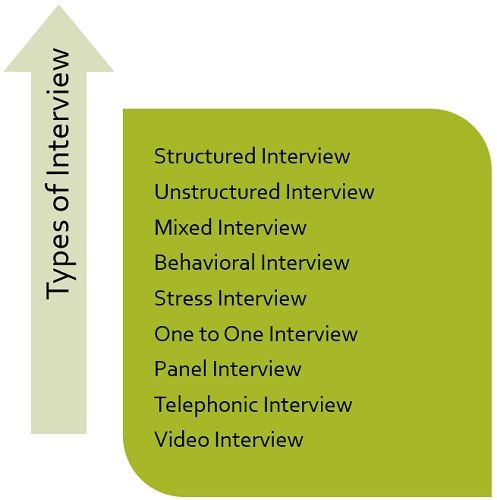 Halo effect refers to cognitive bias, wherein the interviewer makes a judgement about the applicant’s overall potential for the performance of the job, considering a single characteristic, like the way he/she talks, sits, dresses, etc.

Interviews also have several shortcomings, such as lack of reliability, i.e. no two interviewers give similar points to an applicant after the interview. Further, lack of validity and biases of interviewers may also trouble interview.