Definition: The Liquidity Adjustment Facility or LAF is the principal operating monetary policy tool that allows banks to borrow money through repurchase agreements. This means, in order to meet short-term cash needs, bank, borrow money against government approved securities with an agreement to repurchase the same at a predetermined rate and date.

The liquidity adjustment facility is used to aide banks in the emergency arising out of severe cash shortage or acute liquidity crisis. It is used for modulating the short-term liquidity and transmitting the interest rate into the market.

There are two major components of the liquidity adjustment facility: 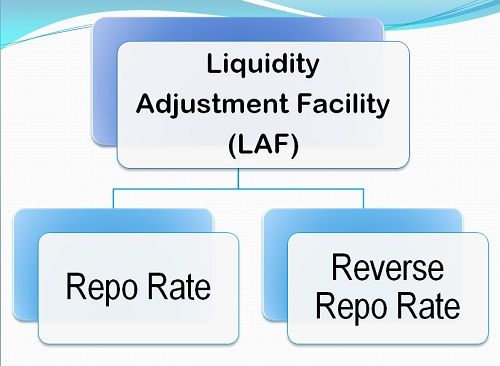 Repo or repurchase option allows the scheduled commercial banks to borrow funds from the Reserve Bank of India against any government approved securities with an agreement to repurchase them in the near future at a predefined rate of interest. The rate at which RBI charges from the banks against such lending is called the Repo rate. Through these operations, the liquidity is injected into the economy or the financial system.