Definition: The Psychological or Emotional Barriers refers to the psychological state i.e. Opinions, attitudes, status consciousness, emotions, etc. of a person that deeply affects the ability to communicate.

The communication largely depends on the mental condition of a person, if the person is not mentally or emotionally sound, then he cannot communicate effectively either as a sender or a receiver.

The main kinds of Psychological or Emotional Barriers are: 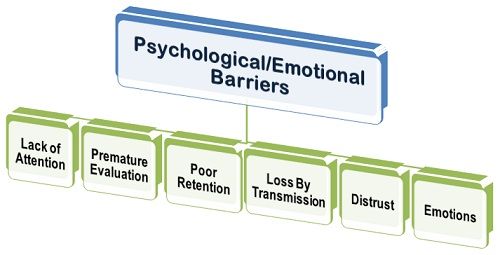 Thus, every human being has a unique mind which is composed of varied emotions, beliefs, perceptions, opinions, and thoughts that facilitate different forms of communication.