Definition: The Business Cycle refers to the periodic boom and slump in the economic activities reflected by the fluctuations in aggregate economic magnitudes which includes total production, employment, investment, bank credits, wages, prices, etc. Simply, the business cycle refers to the ups and downs explained in terms of expansion and depression that an economy experiences over a period of time.

The classical school of thought believed that “supply creates its own demand” was the most valid and accurate explanation of the world economic behavior and that the unemployment arises due to the inflexible wages and the interest rates. According to Adam Smith, the market forces is the invisible hand, that would maintain the stability in the economy by themselves.

Then came Keynes, who proposed the general economic theory wherein he provided standard tools to analyze the causes of fluctuations in the economic activities. In the post-keynesian era, the main contributors to the business cycle theories include Hicks, Samuelson, Harrod and others.

The Following are main theories of business cycle that relatively has a greater relevance to the modern business conditions: 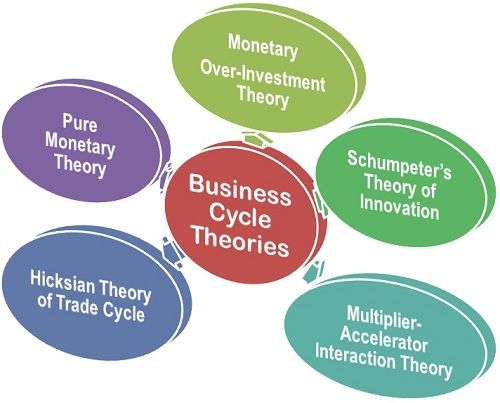 The business cycle theories explain the reasons for fluctuations in the economic activities and the ways to manage these booms and slumps so as to attain the economic balance.