Definition: The Trait Theory asserts that an individual is composed of a set of definite predisposition attributes called as traits. These traits are distinguishable and often long lasting quality or a characteristic of a person that makes him different from the others.

The two most common trait theories are: 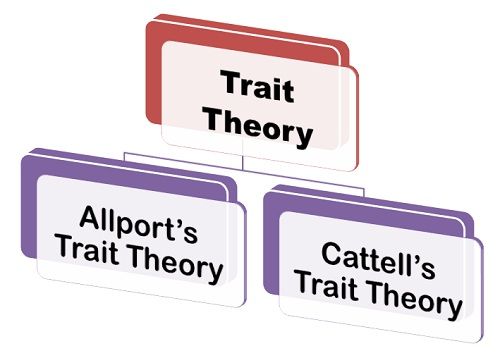 Allport’s Trait Theory: This theory is given by Gordon Allport. According to him, the personality of an individual can be studied through a distinction between the common traits and the personal dispositions.

The common traits are used to compare the people on the grounds of six values, such as religious, social, economic, political, aesthetic and theoretical. Besides the common traits, there are personal dispositions which are unique and are classified as follows:

Cattell’s Trait Theory: This trait theory is given by Raymond Cattell. According to him, the sample of a large number of variables should be studied to have a proper understanding of the individual personality.

He collected the life data (everyday life behaviors of individuals), experimental data (standardizing experiments by measuring actions), questionnaire data (responses gathered from the introspection of an individual’s behavior) and done the factor analysis to identify the traits that are related to one another.

The trait theory is based on the assumption that the traits are common to many individuals and they vary in absolute amounts. Also, the traits remain consistent over a period of time, and thus can be measured through the behavioral indicators.