Definition: Bill of Exchange, can be understood as a written negotiable instrument, that carries an unconditional order to pay a specified sum of money to a designated person or the holder of the instrument, as directed in the instrument by the maker. The bill of exchange is either payable on demand, or after a specified term.

In a business transaction, when the goods are sold on credit to the buyer, the seller can make the bill and send it to the buyer for acceptance, which contains the details such as name and address of the seller and buyer, amount of bill, maturity date, signature, and so forth.

Features of Bill of Exchange

Parties to Bill of Exchange 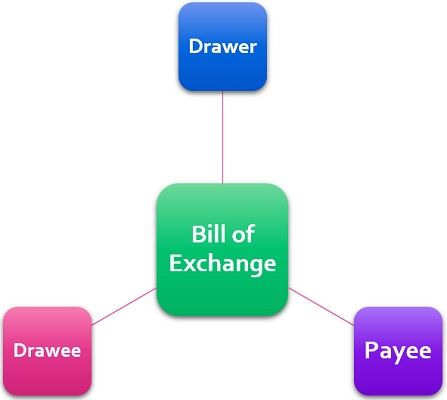 Now, apart from the parties mentioned above, there are some other parties to a bill of exchange, described as under:

Specimen of Bill of Exchange

The instrument will be called as Bill of Exchange, which is transferred to Peter, on whom the payment is due, for the goods purchased from him.