Definition: Capital Expenditure or CapEx refers to the financial outlay made by the firm for an asset which is expected to stay in the business for a long time, so as to use the same for more than one financial year, which not only generates enduring benefits for the company but ensures the generation of revenue over the years.

In finer terms, when the company uses its funds for acquiring, improving or upgrading its long term assets, so as to increase its productivity, capacity and efficiency, such an expense is called as capital expenditure.

These expenditures can also be made with the aim of increasing the scope of operations, improving the working condition of assets or extending the useful life of the assets. Such expenditures are primarily made by the company to start a new unit, project or venture, with an aim of earning revenue therefrom.

Capital expenditure incurred by the firm for buying or upgrading the asset accrues long-lasting benefit to the firm and so the total amount spent on it will also be spread over the useful life of the asset.

Furthermore, the asset purchased by making capital expenditure can be reconverted into cash, irrespective of the fact that the reconversion resulted in profit or loss.

There are certain factors on the basis of which the expenses are considered as capital expenditure, they are: 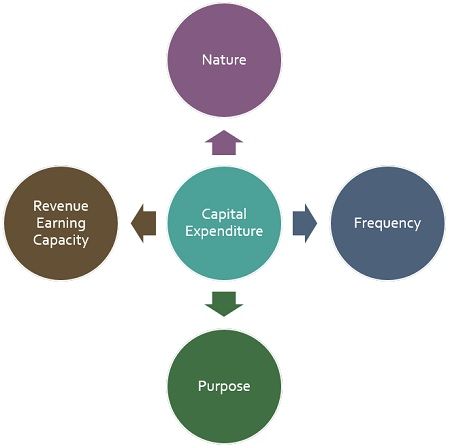 Capital Expenditure is shown in the asset section of the balance sheet, as they generate revenue to the company, for more than one accounting year.

Further, these expenses are transferred to the company’s profit and loss account (income statement) of the year, as per the utilization of that benefit, from the expenditure, in the concerned accounting year.