In finer terms, Depositary Receipt implies a negotiable certificate, which the Depository Bank issues to the foreign investors, indicating the shares in a foreign company. These DRs are traded on the local stock market, be it stock exchange or an over the counter market or among the Qualified Institutional Buyers (QIB). Hence, DR’s are negotiable securities in a foreign nation, which indicates publicly traded domestic equity of the company.

In a nutshell, DRs is a reflection of underlying shares. Further, these are administered through the global depository. Foreign investors holding depository receipts indicate that they hold shares in the equity of the foreign country.

These Depository Receipts are traded in the Stock Market of different countries, such as London, Luxembourg, Germany, Singapore and the United States.

Hence, the evolution of DRs considerably reduced the complexities of investing in foreign securities. Also, investment in foreign equity has now become easy and convenient for investors.

Some of the most common reasons for the issue of depository receipts are given as under:

Depository Receipt Mechanism is an indirect one, as it does not directly invite the foreign investors to buy the shares and lists the shares on the stock exchange for the purpose of trading in the stock market. And the investors subscribe to it and they are allotted the DRs. So, it is an indirect issue of shares overseas using a substitute listing system.

Come let’s take a look at the process of issuing depository receipt: 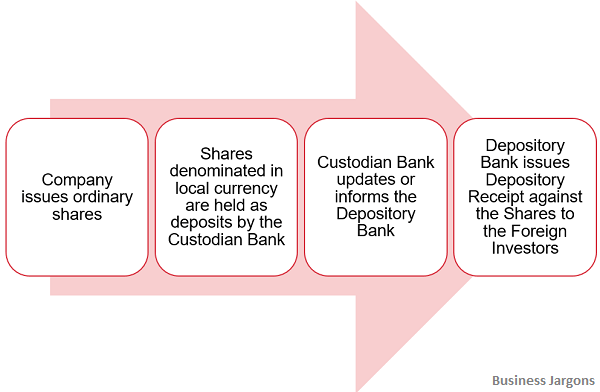 There are various types of Depository Receipts which are issued by banks of different countries around the world. Some of them are discussed hereunder:

Depository Receipts come into being when the domestic currency shares of the company are issued to the depository’s local Custodian Bank, in relation to which the Depository Bank of the foreign country issues Receipts in the foreign currency such as US Dollar, Euro, Pound Sterling, etc., which can be traded openly in the foreign market, like other securities.

Depository Receipts facilitates the companies to use the international market to raise funds using equity shares,