Definition: Primary Market is a form of the capital market wherein new securities are sold by the companies for the very first time to the investors, to raise funds and that is why it is also acknowledged as New Issues Market (NIM).

The process of selling the new securities, in the primary market is called underwriting, which is performed by a group called as underwriters or security dealers.

The underwriting service is offered by financial institutions such as investment banks, insurance companies, etc. The underwriting companies guarantee payment if there is any loss and accepts the risk which occurs as a consequence of such guarantee.

The main function of the primary market is to mobilize the investible money from the savers to the companies or young entrepreneurs who seek funds to set up new businesses or expand the existing venture, by issuing securities.

Types of Issue of Securities in Primary Market

There are several types of issue of securities in the primary market which are discussed as under: 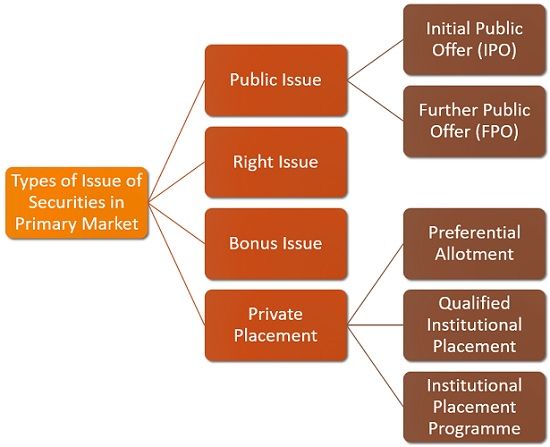 In a nutshell, Primary Market is a market where new long term securities are created and issued to the public for sale through IPO, that helps the company, public sector institutions and governments to raise funds. These funds are injected by the company in new projects and also to expand or upgrade the existing projects.