Definition: Dishonor of Negotiable Instrument refers to the state when the party who has to pay the sum in an instrument fails to honor it. In other words, it implies the loss of honor for the instrument indicating the unsuitability of the instrument to realize funds.

On the dishonor of the negotiable instrument, the holder of the instrument must issue a notice of the same to all the parties concerned. This is done to make them liable. It is of two types: 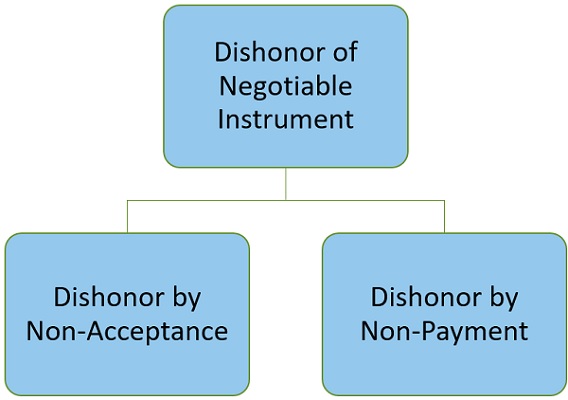 When a bill is duly presented for acceptance, however, it is not accepted by the party concerned, it is called Dishonour by non-acceptance. It can take place in the following ways:

Effect: On dishonor by non-acceptance, the holder has the right to sue, all the parties thereto, even when the bill is not matured.

Dishonor by non-payment arises when the maker of the promissory note, acceptor of the bill of exchange, and the drawee of the cheque defaults in the payment or refuses to pay the sum due on the instrument when it is being presented for payment. Dishonor of bill and note can also take place in case the instrument is expressly excused by its acceptor or maker or when it remains unpaid at or after maturity.

In case the negotiable instrument is dishonored, by any of the reasons mentioned above, the other parties to it are charged with liability.

Who can give notice?

The notice of dishonor can be given by the holder or any party to it who is liable afterward is required to give notice to all the previous parties, whom he wants to make liable for the same. Notice can also be given to the agent of any such party.

Note: If a stranger gives notice of dishonor, it is regarded as invalid.

An agent can also give notice to all the prior parties liable for the instrument or he can notify his principal if the instrument is deposited with the agent for the purpose of presentment and it is dishonored.

The time limit for giving notice remains the same, no matter the notice is given by whom – principal or agent.

To whom the notice is given?

It can be given to:-

No notice is given to the maker, acceptor, or drawer of the instrument, as they are the principal debtors.

In what mode notice is given?

Notice can be given in both the modes – oral or written or partly oral and partly written. For this purpose, any form can be used, however, it must inform the parties concerned to whom the notice is being served, be it expressly or impliedly. It should be noted that a written notice is sent via post.

What is the reasonable time for giving notice?

The reasonable time can be decided on the basis of the distance between the parties and the nature of communication between them. It should be noted that public holidays would be excluded at the time of counting reasonable time.

Compensation of Dishonour of Negotiable Instrument

The compensation payable will be equal to the sum of the amount due on the instrument, expenses on noting and protesting, interest on the principal amount, and the difference in the exchange rate (if any)