Definition: Shares can be described as the financial instrument issued by the company to raise funds from the general public. A share represents fractional ownership in a body corporate. Thus, a share is the smallest unit of the company’s overall net worth.

The holders of the shares are known as shareholders, who are the real part owners of the enterprise. Hence, the extent of ownership of a shareholder is based on their holdings in the company. The return on the amount invested by the shareholder is termed as Dividend.

Basically, there are two kinds of shares, given as under: 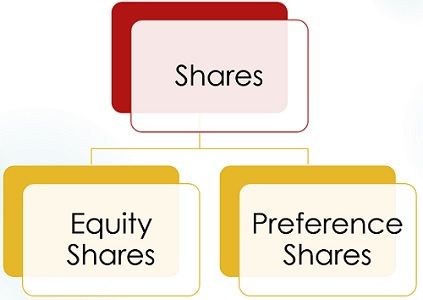 Equity shares or otherwise called as ordinary shares are the shares, that carry –

Ordinary shareholders share profits of the firm, in the form of dividend declared by the company and bonus shares. The dividend is paid to them at last, i.e. after paying off all the taxes, interest and dividend to preference shareholders.

The rate of dividend is not fixed, i.e. whatever the company earns as a profit, a certain percentage of it is declared as a dividend by the company to the equity shareholders.

Again, at the time of winding up of the company, equity shareholders are paid at last, i.e. after settling the claims of creditors, debenture holders and preference shareholders.

Funds raised by issued equity shares brings permanent capital to the company. As the equity shareholders undertake the highest risk, they are regarded as the true owners of the company. The cost of these shares is usually high, as the shareholders expect a good return on their investment, against the risk taken.

Preference shares refer to the shares that carry preferential right concerning the dividend payment (i.e. either certain amount, or at a certain rate) and repayment, at the time of winding up of the company.

It is, in fact, a hybrid source of finance which contains the features of both equity capital as well as debt capital. It is identical to equity capital because it carries dividend which is not tax deductible, but at the same time, the dividend rate is fixed which makes it similar to debt capital wherein the interest rate is certain.

There are various types of preferences shares such as:

Preference shares are usually cumulative as if the dividend is not paid for a year due to loss, then that will be carried forward for the next year. And if it continues consecutively for two years, then the preference shareholders get the right to vote at the AGM of the company.

The liability of the shareholders is limited to the face value of the shares, wherein the face value refers to the denominated value. Further, the shares are movable in nature, in the sense that it can be transferable in a way specified in the Articles of Association of the Company.