Definition: Sinking fund refers to a specific reserve fund, in which money is earmarked and accumulated over time, for the purpose of redemption of debt, bond, and also for the replacement of a wasting asset. It is obligatory to invest these funds outside the business because when the maturity of the underlying debt becomes due, funds can be availed easily by selling the investment, and no effect is shown on the company’s working capital.

While making an investment into securities, three things are basically considered:

The amount of installment which is invested is calculated using Annuity Table.

It aims is to make available the ready cash for the repayment of liability. Further, how much money is to be invested is dependent on the following factors:

It is usually advisable to invest such funds in government securities (guilt-edged securities), carrying a fixed interest rate. Interest earned thereon is further invested in securities. The objective of this investment is that when the debt gets matured or the life of the asset expires, investments are sold and the proceeds are used to repay the debt or replace the asset.

It is an accumulation of earnings, in which an amount is added either as a fixed percentage of outstanding debt or a fixed percentage of profit. The term ‘sinking‘ is used to mean the dropping level of debt, left out as it gets paid off, whereas the term ‘fund‘ represents the amount invested in outside securities.

Companies that raise money by issuing debt instruments like debentures or bonds, need to pay off the debt or buy back the issued instruments when the maturity date is reached. With the help of a sinking fund, the large outflow of funds can be managed easily. Hence, a sinking fund is created so that the company can contribute to the fund every year and use them at the time of need.

Based on the treatment of interest

It is to be noted that after the issue is made, the annual contribution to the fund consists of a profit and loss appropriation account and the total amount is invested in marketable securities, at the end of the first year. Further, at the end of the second year, interest is received at a certain rate on the investments made.

The journal entries for the sinking fund are as under: 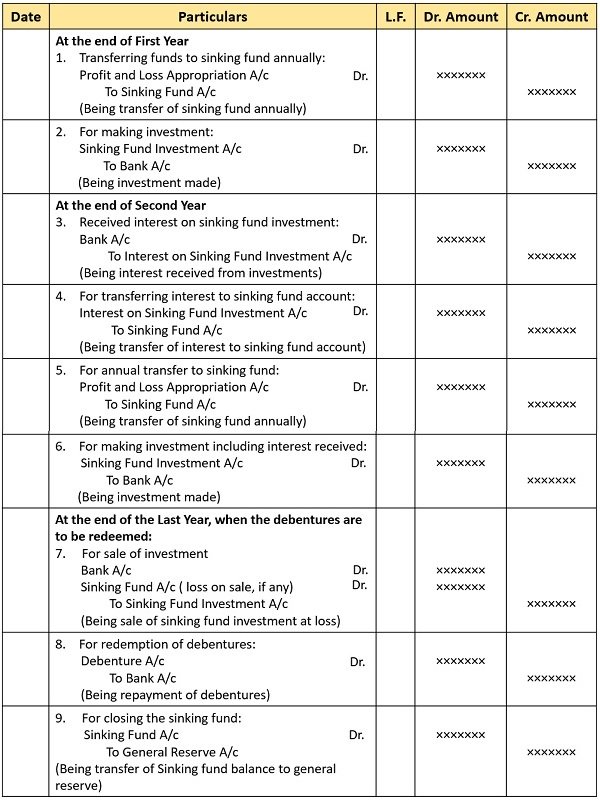 The sinking fund is a fund designed and set up with the purpose of repayment of debt. It is created out of profits every year and the amount is invested in marketable securities. The company appropriates a fixed amount on a regular basis and uses the same for the specific purpose.