Definition: Vertical Integration, as the name suggests, is the combination of firms engaged in different levels of the distribution chain, in the same industry. It involves the augmentation of the firm by uniting the former and latter productive processes. In this form of merger, the company opts to engage in the businesses, which have some link with the existing business line.

In finer terms, it refers to a process, in which a single entity governs the production and distribution of a product or service, so as to enhance the dominance of that company in the marketplace. For instance, when a company takes over its supplier of raw material or its distributor of finished goods to final consumers, then such a strategy is known as vertical integration.

The implementation of vertical integration results in the reduction of overall production cost, by eliminating price markups at different stages of production and distribution. It also increases the operational efficiency, by decreasing the transportation expenses.

Moreover, it attains cost efficiency, as the quality is controlled at each step, which decreases the cost of repairs, returns and downtime. 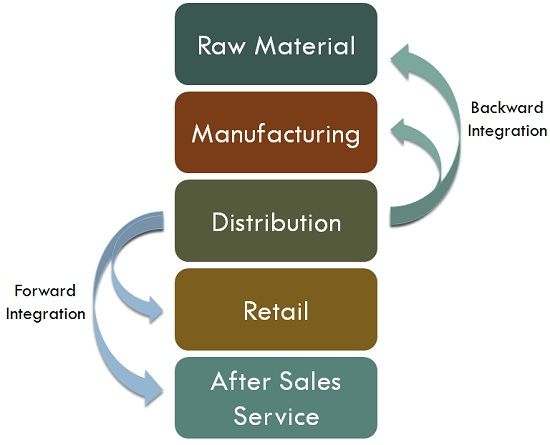 When it comes to implementation, vertical integration is the most difficult strategy, which is not only expensive but also hard to take back.

However, once the strategy is adopted, it captures both upstream and downstream profit margins. Vertical integration can create the entry barriers, for prospective rivals, predominantly when the vertically integrated company owns almost all the scarce resources engaged in the process of production.