Definition: Vroom’s Expectancy Theory was proposed by Victor. H. Vroom, who believed that people are motivated to perform activities to achieve some goal to the extent they expect that certain actions on their part would help them to achieve the goal.

Vroom’s Expectancy Theory is based on the assumption that an individual’s behavior results from the choices made by him with respect to the alternative course of action, which is related to the psychological events occurring simultaneously with the behavior. This means an individual selects a certain behavior over the other behaviors with an expectation of getting results, the one desired for.

Thus, Vroom’s Expectancy Theory has its roots in the cognitive concept, i.e. how an individual processes the different elements of motivation. This theory is built around the concept of valence, instrumentality, and Expectancy and, therefore, is often called as VIE theory.

The algebraic representation of Vroom’s Expectancy theory is: 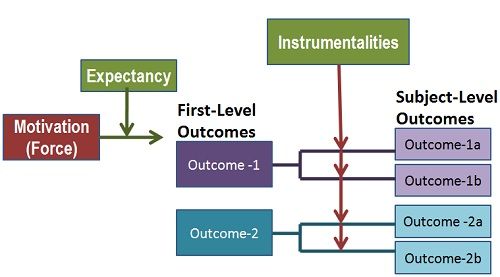 Valence: It refers to the value that an individual places on a particular outcome or a strength of an individual’s preference for the expected rewards of the outcome. To have a positive valence, one should prefer attaining the outcome to not attaining it. For example, if an employee gets motivated by promotions, then he might not value offers of increased incentives. The valence is zero if an individual prefers not attaining outcomes to attaining it. In the above example, an employee agrees with the increased incentives.

Hence, the first level outcome of high performance acquires the positive valence so as to have the expected relationship with the second level outcome of the promotion. Thus, an employee will be motivated to perform efficiently with a desire to get promoted.