Definition: Dispute Resolution refers to a technique of settling the conflicts or claims between two parties, i.e. employer and employees. The technique aims at achieving fairness for both the groups and arriving at an agreement between by consensus, often initiated by a third party. These disputes are caused by wage demands, unfair labour practices, political interferences, union rivalry, etc.

There are seven methods of resolving industrial disputes which can be adopted as per the different situational requirements. 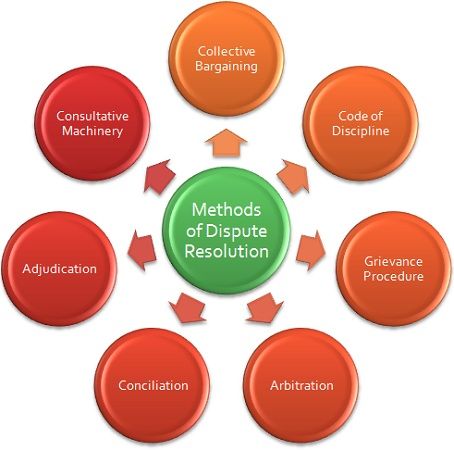 The consequences of industrial disputes have an adverse effect on all stakeholders like employees, society, management, government, investors and so on. The company’s management has to bear the loss of production, revenue and profit as well. Even employees have to face hardships due to lockouts and strikes, which may result in loss of wages and even jobs. So, the industrial disputes should be resolved as soon as possible.