Definition: In economics, factors of production, as the name signifies are the inputs or say resources acquired by the firm to use them in the production of goods or services, so as to earn a profit.

The word ‘production‘ refers to a systematic process of converting the inputs, into finished products, which can be goods or services. For this purpose, the product has to pass through different processes, stages and hands, to reach the final consumers, in its consumable form. The production level is based on the quantity of inputs and production capacity of the firm.

Basically, there are four factors of production, on which the entire process depends. These Factors are: 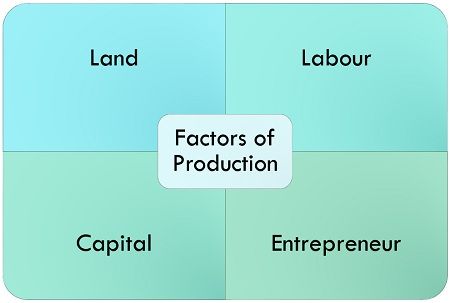 With respect to factors of production, the word ‘land’ has a different meaning in economics, as it covers all free gifts of nature such as natural resources, air, light, water, natural vegetation, fertility of soil, heat, etc. rather than just an area or earth’s surface. The economic reward for using the land is rent.

Labour refers to the human resource who exerts physical or mental efforts, to produce the goods or services for specific consideration, i.e. salary, or wages.

Capital can be understood as all the human creations, such as tools, plant and machinery, equipment, money, etc. which are used for further production of wealth. In better words, capital is not an original and principal means of production, rather it is a produced one.

An entrepreneur is the most important factor of production, without which the production process cannot be initiated as the rest of the factors are disorganized or dispersed at various locations and it is the entrepreneur who takes charge of arranging and assembling them, to start the process of production.

An entrepreneur performs the role of an innovator, manager, organizer, leader, risk-taker, and coordinator. The reward of an entrepreneur is profit.