Definition: The Variable Proportion Production Function implies that the ratio in which the factors of production such as labor and capital are used is not fixed, and it is variable. Also, the different combinations of factors can be used to produce the given quantity, thus, one factor can be substituted for the other.

In the case of variable proportion production function, the technical Coefficient of production is variable, i.e. the required quantity of output can be achieved through the combination of different quantities of factors of production, such as these factors can be varied by substituting other factor/ factors in its place.

Suppose 40 workers are required to produce 200 units of a product, then technical Coefficient of production will be 1/5. In the case of a variable proportion production function, one fifth of labor is not necessarily to be employed, but however, the different combinations of factors of production can be used to produce a given level of output. Thus, the labor can be substituted for any other factors.

The concept of variable proportion production function can be further understood from an isoquant curve, as shown in the figure below: 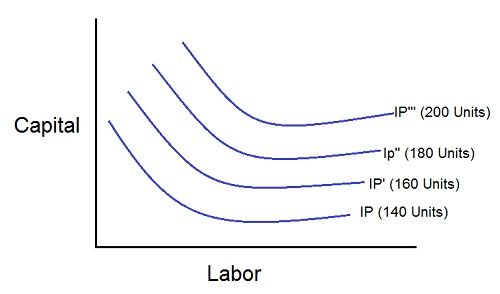 In the figure, the isoquant curves show that the different combinations of factors of technical substitution can be employed to get the required amount of output. Thus, for the production of a given level of product, the input factors can be substituted for the other.