Definition: The Linear Homogeneous Production Function implies that with the proportionate change in all the factors of production, the output also increases in the same proportion. Such as, if the input factors are doubled the output also gets doubled. This is also known as constant returns to a scale.

Thus, with the increase in labor and capital by “n” times the output also increases in the same proportion. The concept of linear homogeneous production function can be further comprehended through the illustration given below: 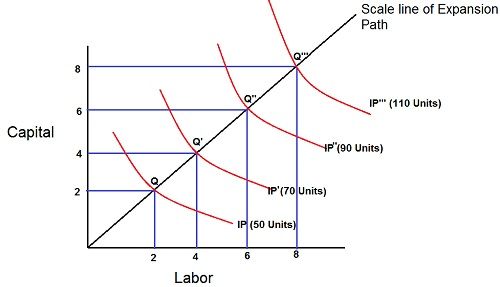 In the case of a linear homogeneous production function, the expansion is always a straight line through the origin, as shown in the figure. This means that the proportions between the factors used will always be the same irrespective of the output levels, provided the factor prices remains constant.