Definition: Forfeiture of Shares or Share forfeiture is a process in which the company’s directors annul (cancel) the rights of a shareholder, who has not paid the call money due on time when the company demands and, even after receiving the notice for such non-payment.

Conditions for Forfeiture of Shares

There are certain conditions that are to be met before the forfeiture of shares, these are: 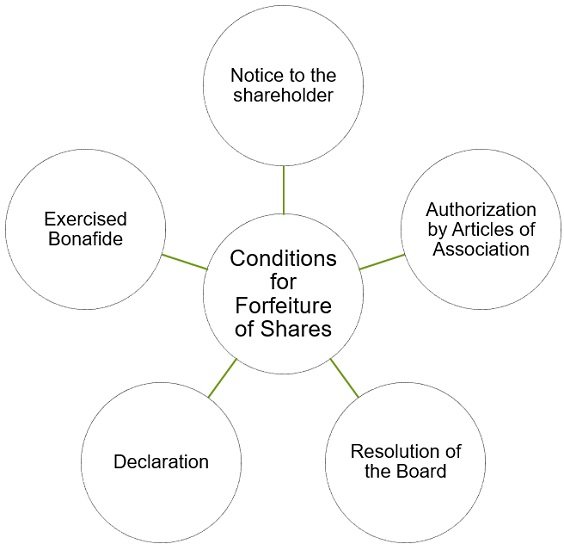 Notice to the shareholder

According to Regulation 28 of Table F, prior to the forfeiture of any shares, the members who default in the payment of calls must be issued a notice, requiring them to pay the unpaid sum of shares along with the interest. Further, the notice needs to specify the day on or before which, the payment has to be made and also specify that in case of default in payment, it may lead to forfeiture of shares.

Further, as per regulation 29, the period of notice should not be less than 14 days, to pay the unpaid sum, right from the date on which the notice is received.

Here it must be noted that any kind of irregularity be it in the contents of notice or in service of notice would invalidate the forfeiture.

Authorization by Articles of Association

According to Regulation 29 of Table F, the shares can be forfeited by the directors only when the person defaults in the payment of shares or installment of shares. After that, the company’s directors are authorized to remove his name from the Register of Members, as well as to treat the amount, previously paid by him on the application or on the allotment, forfeited to the company. Hence, if the company’s articles of association do not provide for it, then forfeiture is void.

In general forfeiture of shares can be made for non-payment of shares, however, the company’s articles of association may state some other grounds on which shares are forfeited.

Resolution of the Board

According to Regulation 33 of Table F, a duly verified written declaration that the declarant is the director, manager, or secretary of the company and that the shares of the company are forfeited in the manner prescribed on the date specified in the declaration acts as a valid proof of the facts given therein against all the individuals who might claim the entitlement of shares.

The exercise of forfeiture of shares must be performed bonafide i.e. in good faith, and for the benefit of the company.

Upon cancellation of forfeiture, the shareholder must pay all the money due on calls along with the interest and then the name of the shareholder is restored in the Register. 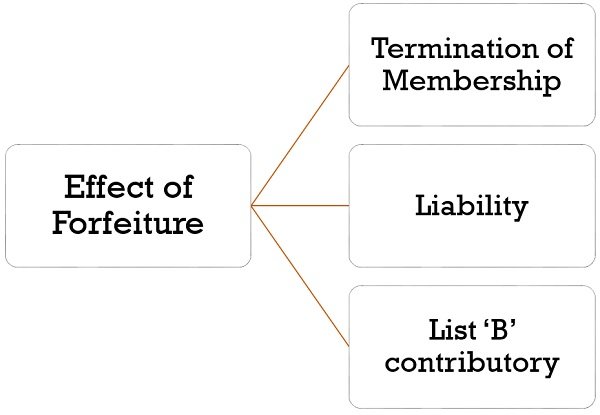 Once the process of forfeiture of shares is completed, it is conclusive and it cannot be revoked. Therefore, the requirements of shareholders must be complete so as to result in a valid forfeiture.

A shareholder can file a suit against the company for his shares forfeited in an incorrect manner or by mistake. The shareholder can sue for damages in case the forfeited shares are reissued to another person.