Definition: Management by Exception, shortly called as MBE is a management style or philosophy that empowers the manager to concentrate on the exceptionally important or critical matters and taking important decisions while facilitating the front line workers to complete the day to day activities.

It aims at keeping the focus of the management on extremely important tasks and problems or areas in need of action.

Components of Management By Exception

The six fundamental components of Management By Exception are: 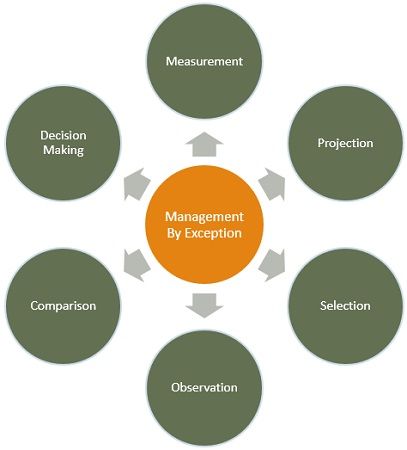 This principle requires the compliance of the principle of delegation of authority, i.e. a substantial degree of delegation must be present in the organization. According to this principle, any issue of unusual or non-recurring nature needs to be referred upwards, so as to be decided by the top tier executives and managers.

Process of Management By Exception

The steps involved in the process of Management by Exception (MBE), are listed as under:

It is a well-known fact that if an organization seeks to control everything, resultantly it controls nothing. Hence, only material deviations, that exceed the specific limit, are referred to the management. Meaning that any information reflecting a considerable variance from the budgeted or planned results are taken to the notice of the top-level management.

Therefore, if the company’s policies lay down 3% increase in the overheads as an acceptable range, then anything over and above will be informed to the top executives.

Once the management is made aware of such deviation, it should be analysed to know the causes for such deviation, be it defective process, the inadequacy of resources, unrealistic standards, etc. Thereafter the actual cause is identified, corrective action is taken to overcome, at the appropriate level.

Importance of Management By Exception

The points given below will discuss the importance of management by exception:

In a nutshell, in management by exception, the manager steps in, only when the employees fail to meet out their performance standards.