Definition: Minutes, otherwise called as the Minutes of Meeting (MoM) is the immediate comprehensive written account of the meeting, explaining the business transacted at the meeting. It comprises of accurate and fair notes of the proceedings that happened at the meeting.

The contents of the minutes are divided into two categories: 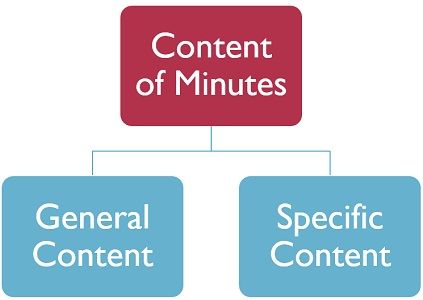 It takes into account the basic details of the proceedings:

Among other things it should record:

It is a source of information to those who are unable to attend the meeting and also to refer back the details whenever required.

Legal Requirements for preparation and maintenance of Minutes

It should be stored forever and that too under the aegis of the Company Secretary of the company or any director specifically authorized by the Company’s Board for this purpose.

Points to be considered while preparing Minutes

There are certain points which are to be kept in mind at the time of preparation of minutes. These are:

The recording of the proceeding of meetings is the duty of Company Secretary. However, if there is no Company Secretary, it should be recorded by any such person authorised by the Board or Chairman.