Definition: Prospectus is an offer document or information brochure issued by a public company used for inviting offers from the general public for subscribing the shares.

It contains all the material information as to the price and number of shares/convertible shares being offered for sale to the public, which helps the investors to take a rational decision regarding the investment of his/her funds.

Fixed Price issue is one such issue wherein the company decides the issue price in the first place and discloses the same in the prospectus (offer document).

On the Contrary, Book built issue is the type of issue in which the price of the issue is decided as per the securities demanded by the potential investors at different price levels.

There are various types of the prospectus, discussed as under: 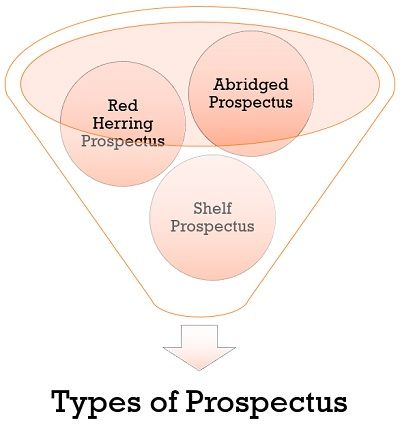 Disclosures to be made in a Prospectus

In a nutshell, securities can be offered for sale, by inviting applications from the public at large through the issue of prospectus. The prospectus needs to be filed with RoC and must adhere to the minimum information requirements, as it is the only genuine source of information to the investors to know the soundness of the Company.

The primary aim of the issuance of the prospectus is to save the investors from being cheated or deceived. The regulatory body also makes it compulsory for the issuer to make a complete disclosure of the relevant particulars and present it to the prospective investors. If any company violates the rules concerning the disclosures, then it has to pay a penalty for the same.