Definition: Annual General Meeting, shortly referred to as AGM, is the compulsory yearly formal get together of the company’s shareholders held to transact lawful business. It is a significant event organized by the company every year to discuss the activities, strategies and performance with its shareholders.

Further, it is provided that the company’s board should hold a meeting or authorize the holding of the meeting of its members, to transact ordinary business and special business (if any).

Further, when the Board does not organize the general meeting in any financial year, the interested member has the right to apply the relevant authority for the same and the authority then directs the convening of AGM.

There are certain legal rules which are to be complied with, discussed as under:

The AGM can be convened during the business hours, i.e. from 9:00 AM to 6:00 PM on any day except National Holiday. The meeting can be organized at the company’s registered office (head office), or at any other place, in the city in which the registered office is located.

Further, AGM of an unlisted company can be organized at any place within the country, if all the members give their consent in writing or online, beforehand.

When we talk about Government company, it is the Central Government which approves any place other than its registered office, for holding the meeting.

There are two types of business which are transacted at an AGM, these are:

The requirements of a Valid AGM are discussed as under: 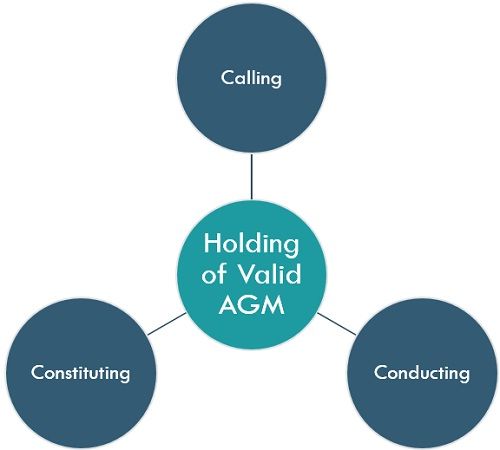 In case if the AGM of the body corporate for any financial year has not been convened, the company’s financial statement and the documents needed to be attached, duly signed along with the statement of facts and reasons for not organizing the AGM is required to be submitted to the Registrar of Companies.

Further, the filing is to be done within sixty days of the last date prior to which the meeting has to be convened, along with the fees or additional fees stipulated by the authority in this regard.