Definition: Reserve, as the name suggests is a part of undistributed profit retained in the business so as to provide for specific future needs like growth and expansion, or to meet any known or unknown expenditure or contingency, liability, or reduce the value of the asset. This means that profit is kept in the business and not distributed otherwise, which helps in future expansion activities.

It is an appropriation of profit that strengthens the company’s financial position. Therefore, it decreases the amount of profit that is available for distribution, among the company’s shareholders. It appears on the liabilities side of the Balance Sheet, under the head Reserves and Surplus.

Reserves are that portion of the profit that is earmarked for a specific purpose. The salient features of Reserves are: 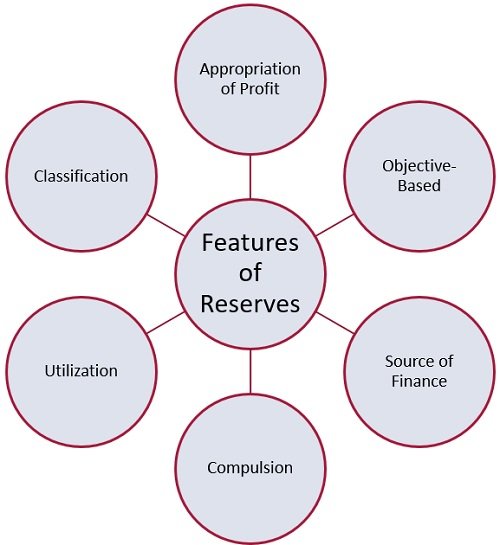 Based on Creation there are two types of reserves:

Revenue Reserves are the reserves that are created out of profit earned by the firm during the day-to-day business operations. Profit withheld from paying dividends out of the total distributable profit is called Revenue Reserve

The reserves which are created out of the capital profit generated from the following:

Such reserves are called capital reserves. It is a device for conserving profits and adds stability to the company’s finance. It does not include any free balance that can be used for the purpose of distribution of profit.

Based on Objectives there are three types of reserves:

Free reserves which are not created for a specific objective and are meant to meet unforeseen future uncertainties, liabilities or commitments, are called general reserve. It is a source of internal finance. The reason for its creation is to improve the company’s financial status, to arrange funds for meeting abnormal losses, to provide means for further expansion of operations.

It means ploughing back of profits and is not binding upon the companies to maintain a general reserve. Hence, it can be created if the management thinks fit and the profits are sufficient.

Specific Reserve is the one created for a definite purpose such as:

The reserve which is made due to the requirement of the law of land is termed as a statutory reserve, such as capital redemption reserve, whose creation is mandatory.

What is Secret Reserve?

Reserves that are not shown in the balance sheet are termed as a secret reserve or hidden reserve. If the secret reserve is created, then it is quite obvious that the true and fair picture of the financial position is not depicted by the financial statements of the company.

Secret reserve is created to meet extraordinary losses in the future, to strengthen the company’s financial position, to show a steady trend of profit earning, to evade taxes, etc.

The firm can use the given means to create secret reserve:

Reserves are accumulated profits that are meant to be used for specific purposes. It increases the working capital of the enterprise and strengthens the financial foundation.