Definition: Shell Company implies a fictitious company with no active business operations. These companies are formed with an aim of achieving specific business objectives which may or may not be legitimate. Such companies do not have a physical existence, as they exist only on paper. Meaning that it has no office, no staff, no assets, but just a bank account, to carry out financial transactions in the name of the company.

Such companies are not always illegal. These are formed to avoid taxes without attracting any legal consequences. And tax avoidance is not illegal but undesirable. However, many times shell companies are set up to park black money, to perform illegal or fraudulent activities, and to play the role of a facilitator of money laundering. 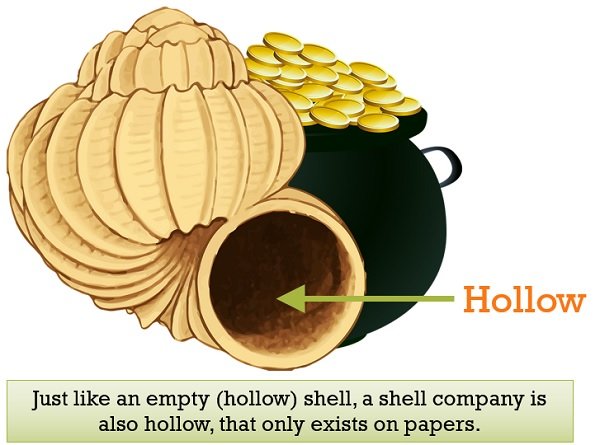 These companies are non-traded corporations, which are used as pass-through, that allow other firms to effortlessly transfer funds from one country to another.

Basically, a shell company is used as a means to perform different financial activities and it remains dormant for future use. In general, shell companies are opened in tax haven countries.

One should take note that a shell company is not defined under the Companies Act, 2013. So, for the purpose of its identification, the Securities and Exchange Board of India has given a few guidelines which include:

Apart from SEBI, there are some other bodies who have also provided a number of criteria to identify Shell Company are:

For creating a shell company, the steps followed include:

You might have a question in mind that – What do these tax haven countries get?

Well, as these are tax haven countries, they do not earn from taxes like property tax, corporation tax, VAT, dividend distribution tax, etc. Rather they make money from the registration fee from the incorporation of shell companies, as well as renewal of licenses year after year. Additionally, it helps in the development of banking infrastructure, which creates job opportunities for people who reside there.

Further, David Haven Limited sells goods to David Paris Limited @ ₹ 600 crores. The company David Haven Limited earns a profit of ₹ 300 crores, still, it does not need to pay any taxes on the export as it is based in a tax haven country. Now, David Paris Limited will sell the goods to customers of Paris @ ₹ 600 crores. As the company does not earn any profit on the sale of goods. No tax will be payable.

Now, to bring back these funds to the home country, foreign direct investment is made by the shell company.

Illegitimate purposes for which a shell company is formed are:

Apart from the above-given purposes, a shell company can also be constituted to act as a vehicle to arrange money prior to the beginning of operations of an enterprise or to seek a takeover of another firm. Another name for shell company is Phantom Companies, Anonymous Companies, and Ghost Companies.