Definition: In legal parlance, the word ‘agreement’ is used to mean a promise/commitment or a series of reciprocal promises which constitutes consideration for the parties to contract.

In an agreement, one person offers or proposes something to another person, who in turn accepts the same. In other words, offer plus acceptance amounts to the agreement, or we can say that an accepted proposal is an agreement.

What is a Promise?

The party to the agreement, to whom the offer is given or proposal is made, gives his/her assent in this regard for mutual consideration, the offer is considered as accepted, which results in a promise.

What are Reciprocal Promises?

In the Contract Act, the word ‘reciprocal’ refers to ‘mutual or give-and-take’. Hence, ‘reciprocal promise’ is the promise which results in consideration or part thereof, for the parties to the agreement.

The main characteristics of the agreement are discussed below: 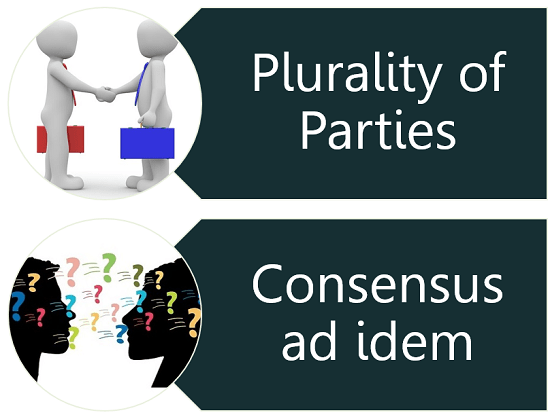 This means that the parties to the agreement must agree upon the same thing in the same sense, as it was intended, with respect to their corresponding rights and duties, concerning the performance of promises in the past or future.

Basically there are two key elements of the agreement, which are discussed as under:

The term ‘agreement’ is broader in comparison to ‘contract‘, as in “Every contract is an agreement, but vice versa is not possible”. This is because, all the contracts, contains the elements of the agreement, i.e. offer and acceptance, however, not all the agreement contains the main element which constitutes a contract, i.e. Legal enforceability. So, we can say that every agreement is not a contract.