Definition: In common parlance, consideration refers to something paid to someone in return for something else. In legal terminology, it can be understood as the price or compensation which has to be paid by the promisee to the promisor for doing or not doing an act.

Consideration is necessary for a valid contract, in the absence of which a promise cannot be enforceable. It may inhere some benefit, right or interest, to be received by the promisor, or loss, detriment, or obligation causing to the promisee. 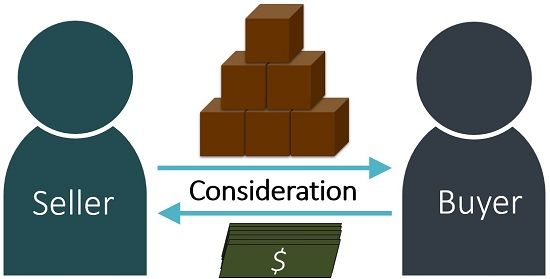 Therefore, consideration can be a promise or performance of an act which the parties to the contract exchange with one another. It is the base of a contract.

There are several rules regarding the consideration, discussed as under:

Therefore, consideration need not be monetary, rather a forbearance to sue, promise for another promise, settlement of the dispute, refraining from something, detriment can also amount to consideration.

Consideration is the essence of the contract, without which there will be no contract at all. However, there are certain agreements which are deemed valid and enforceable even without consideration. These are:

There are mainly three types of consideration:

Note: As per English Law, there are only two kinds of consideration, i.e. executed and executory, while the past consideration is not regarded as consideration, but Indian law deems all the three types.