Definition: By the term ‘negotiation’ we mean an open strategic dialogue that is supposed to resolve the issue between the parties concerned, by reaching an agreement.

The two parties with different needs and goals having some common interest and others divergent intend to arrive at an agreement. So they discuss the matter, in order to find out a solution which is acceptable to and beneficial for everyone.

When does Negotiation take place?

When in any business situation, if there are multiple possible outcomes, wherein two or more parties are having a shared interest. Although the parties haven’t decided so far what will be the possible result. Further, there can be three possible outcomes: 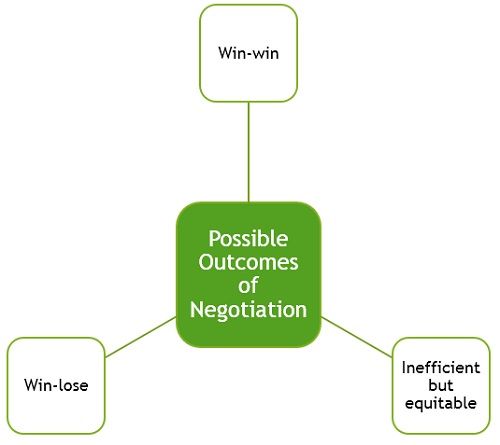 With negotiation, the common interest of the parties motivates them to settle the specific differences.

There are five stages in the process of negotiation:

In this process, each party attempts to convince and persuade the another, to agree and accept their points, but also make some adjustments. It tends to avoid the argument and settle the dispute with a compromise.

The different types of negotiation are discussed as under:

By and large, negotiation is a process in which the parties in a dispute seek to reach an agreement by identifying a beneficial outcome or solution.