Definition: Overdraft refers to open-ended financial assistance which the bank offers to the current account holders, in which the individuals and entities are allowed to withdraw funds from their accounts more than the amount standing in the credit of his/her current account or when the account has zero balance or even when the account shows debit (negative) balance.

Hence, it is a kind of loan which is provided by the banks, on which the current account holder is required to pay interest on the period for which the amount is borrowed, at a specified rate on the overdrawn amount. Further, the borrower can withdraw and repay the amount up to the agreed limit any number of times.

To avail this facility, the customer is required to make a written application to the bank regarding opening the current account with the bank. Further, at the discretion of the lending bank, the facility can be discontinued or modified.

Further, the approved overdraft limit is based on the relationship of each customer with the bank and their creditworthiness like financial stability, account balance, past history, etc. And so the money can be withdrawn up to that limit.

In the year, 1728 the Royal Bank of Scotland started the overdraft facility for the very first time.

The salient features of overdraft are discussed hereunder: 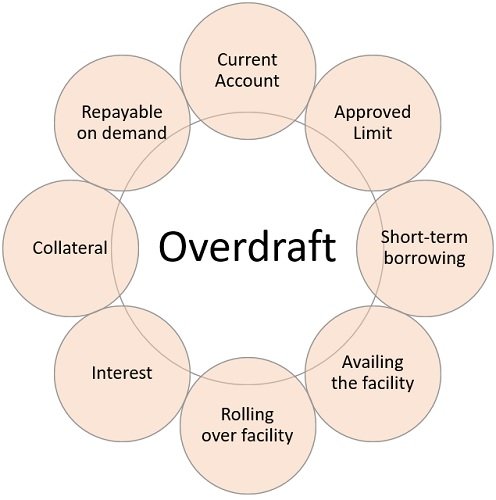 What is Temporary Overdraft?

Overdraft is a temporary accommodation granted against securities. A kind pre-approved loan, which is offered by the lending institutions to the customers having a current account, based on their creditworthiness. Using your overdraft facility means that you are increasing your debt. This facility can be utilized for fulfilling the working capital requirements of the business.