Definition: Conciliation is a process in which the third party persuades the parties in dispute to amicably settle the claims. It is one of the effective and private methods of dispute resolution, in which the conflicting parties take the help of a conciliator voluntarily, who discuss the matter with them, with an aim of settlement of the dispute without going to the court.

For the purpose of Conciliation, the government is empowered to appoint a conciliator, whenever required. In this process, an impartial third party assists the parties in dispute in arriving at a negotiated settlement. With this process, the opposing parties can reconcile their differences by exploring various options suggested by the third party.

In this process, representatives of management and workers come together, before an outside party to settle the disputes quickly and also to avoid work stoppages, by bridging the differences between them and reaching a mutually acceptable agreement. The decision made by the conciliator is non-binding in nature, as they are in the form of recommendations, which can be accepted or rejected by the parties concerned.

It is used when there is a stand-off situation between the management and workers, at the time of negotiation in the trade agreement.

Now you must be thinking what happens when the party rejects the invitation? Well in that case there won’t be any conciliation proceedings. Also if there is no response from the party to whom the notice of invitation is sent, within 30 days of sending the invitation or any such period mentioned in the invitation, then it is deemed as the rejection of the invitation to conciliate the dispute.

Who is a Conciliator?

The conciliator is an independent and impartial third party, that suggests a conflict-free solution. He/She aims at promoting mutual discussion and persuasion, to ensure settlement amidst the parties concerned. The role of a conciliator is like a facilitator. The three principles that guide a conciliator are:

The conciliator not just extends advice to the parties, but also offers suggestions that can help the parties in reaching the solution.

As per Arbitration and Conciliation Act, 1996 conciliation can be used to settle the disputes by different authorities, which are only allowed to promote the dispute settlement, or inquire about them, however, they cannot give awards that abide the parties. So, these authorities are: 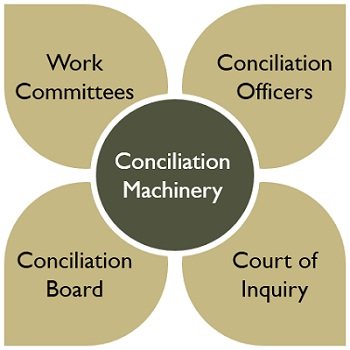 When in an industrial undertaking the number of workers employed or they have been employed in the organization on any day of the preceding 12 months, then the government may demand the formation of a works committee.

It comprises of the representatives of management and workers of equal number. It is constituted to promote voluntary settlement of the conflicts

For the conciliation of the dispute, Government may set up a conciliation board, comprising of one independent third party as chairman and 2 or 4 other members representing the opposing party equally. The board also enjoys the power of a civil court.

Further, when settlement is reached, the report has to be sent by the board to the government, along with the memorandum signed by all the members. But, if there is no settlement then the full report is submitted. The report should be submitted within 2 months from the appointment date. Further, it must contain the signatures of all the members of the board.

The Central or State Government by a declaration in the Official Gazette can set up a Court of Inquiry, to begin investigations related to the disputes. The composition of the court is similar to that of the board, with one independent chairperson and 2 or 4 other members representing the opposing parties.

Appropriate Government refers the industrial disputes to the court of Inquiry. It is authorized to enter the premises and enjoys all the powers of a Civil Court. Further, the report is required to be submitted within 6 months from the date on which the inquiry began. And, the report must contain the signatures of all the members of the court.

Conciliation is an informal, flexible, and non-adversarial method of dispute resolution. On the failure of conciliation, the parties are free to go for arbitration, or the government may pass on the dispute to adjudication, whose decision is binding on the parties concerned.