Definition: Quasi Contract is a retroactive agreement, determined by a judge with an aim of correcting a situation wherein one party obtains something at the cost of another party. It stops one party from getting an unfair advantage from the situation. It takes place when a dispute exists against the payment of goods and services.

Thus such arrangements rely on the court’s order when no prior agreement exists between the parties concerned. Also, it does not possess all the elements of a valid contract i.e. offer and acceptance, legal enforceability, capacity to contract, consideration, and free consent. In simple words, a quasi-contract is a contract that where one or more elements of a valid contract are absent.

It is based on the principle of equity, justice, and good conscience that says – No one is permitted to be unjustly wealthy when the other person is spending.

In a quasi-contract, the law assumes a promise that enforces obligations on one party and confers right in favor of the other. So, these are not actually contracts but the Court of law perceives them as relations similar to the contracts and effectuates them as if they are contracts. 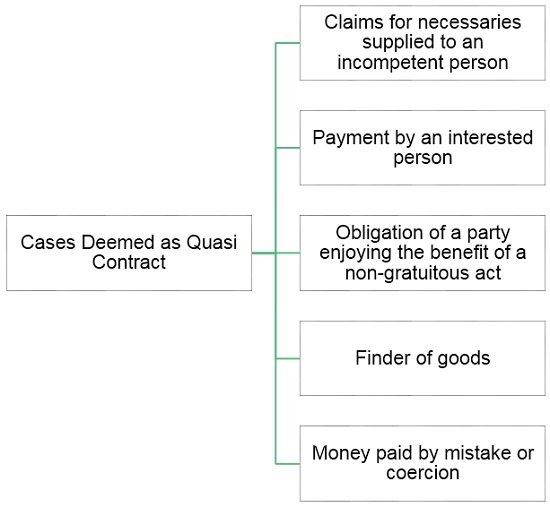 Claims for necessaries supplied to an incompetent person

When a person lacks the capacity to contract, i.e. person of unsound mind or a minor or anyone who is dependent on that incompetent person, the person who has supplied necessaries to that person is entitled to recover the same from the property of such person and if the incapable person does not own any property nothing is payable.

Any act is non-gratuitous, which is not performed free of charge. If a person lawfully performs an act for another person or delivers anything, having no intention to do it gratuitously, i.e. free of charge and the other party gets the benefit of it, then the latter is obligated to compensate for the same or restore what is performed or delivered. And so, the plaintiff is required to prove:

When a person finds goods that are someone else’s property and keeps the same in his custody, has the same responsibility, as that of a bailee, in a contract of bailment. So, it is the duty of the finder of the goods to find the actual owner and return the goods.

Responsibilities of the finder of goods:

The finder of the goods can recover the expenses incurred on storing and maintaining the goods belonging to the owner.

Money paid by mistake or coercion

When money is paid by any party either by mistake or under coercion, the party who has received the money must return or restore it. Here, the word coercion is not covered under section 15, however, it means and includes money obtained by way of extortion or oppression.

The term ‘Quasi Contract’ means the ones that resemble a contract and they give rise to legal obligations as a regular contract does. However, they are entered into without any enforceable agreement. Also, there is no intention of the parties, to enter into a contract.